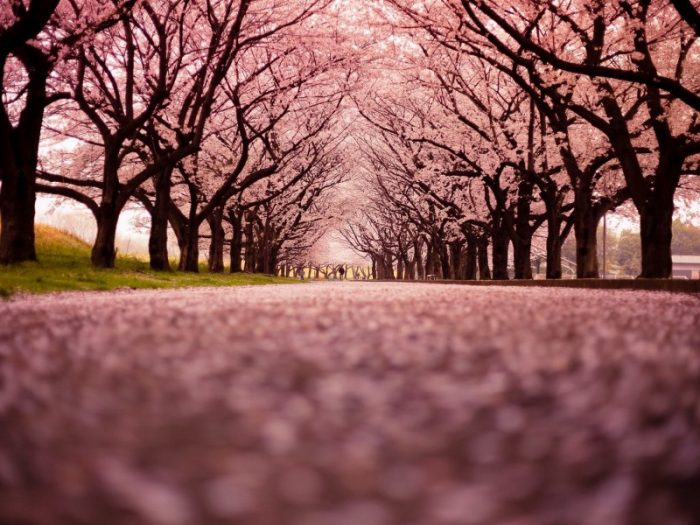 Three cities that are most famous for their cherry blossoms are Washington, D.C., Tokyo, and Beijing. Like skiers hitting a great powder day, it’s a treat for runners to hit cherry blossom lined paths at the peak of their bloom. Each season is different, of course, and predicting peak cherry blossom dates is like trying to get Vermont foliage at its peak.  Generally speaking, peak time is late March to early April. Our guide to some of the best routes to see the cherry blossoms in each city:

Washington, D.C. The best route is the ‘Memorial Run’, starting at the Washington Monument and heading out to the Tidal Basin. Cherry Trees line the area near the Jefferson Memorial. See our Washington, DC running guide for full explanation, map, and details. Another path lined with cherry blossoms is to extend the Tidal Basin run into Potomac Park. It’s ~2 miles one way from the Jefferson Memorial, along the trails paralleling Ohio Dr. to Haines Point. Tokyo. Cherry trees are thought to be native to the Himalayas. They are revered and beautifully cared for in Japan. Cherry blossom festivals abound in season. Fortunately for runners, some of the most popular running routes in Tokyo incorporate lovely, cherry tree lined paths. My recommendations: Beijing. Cherry Garden in Yuyuantan Park (Jade Lake Park) is famous for its cherry blossoms. In the spring of 1973, 180 cherry trees were sent as gifts from Japan and were planted in the garden. Later on, more and more cherry trees were cultivated here. Today the garden has been the home for over 3,000 cherry trees. When cherry trees blossom in early spring (from late March to early April), tourists pour into the garden to enjoy the beautiful flowers. Metasequoias and bamboos flourish in the garden making Cherry Garden a wonderful place even when cherry blossoms are not in bloom. Liuchun Garden is another treat in this park. There are lovely trails in the park. MAP of 4 mile run in Yuyuantan Park. The Trapp Famiy Lodge is a famous Vermont landmark, owned by the Trapp family of Sound and... more...