Big Sur is widely celebrated as one of the most scenic locations in the United States, the jewel of California’s central coast just off Highway 1, where the Pacific Ocean meets the Santa Lucia mountains. While Big Sur itself falls just south of the Monterey Bay, we’ve also included the towns of Monterey and Carmel-by-the-Sea in our guide, so you can enjoy the region to its full running potential. Our guide to running in Big Sur, Monterey, and Carmel includes gorgeous coastal trails, scenic roads, beaches, and redwood forests.

The redwood forests here, which Jack Kerouac wrote so sentimentally about, host a wealth of routes for trail runners, but we’ve diversified our guide to include roads, recreation paths, and beach runs (as well as a couple of the most noteworthy trails). Most are located just off of Highway 1, which is a nice scenic drive but does not have a safe shoulder for running. From downtown Monterey, the Coastal Recreation Trail is a nice commute around the coast while Jacks Peak will take your run to new heights. The Monterey municipal and Asilomar beaches are prime sand running. Carmel has its own share of scenic runs in the Scenic Road and Point Lobos routes. And in the heart of Big Sur, the views don’t get any better than on the Old Coast Road.

A car is nice for exploring Big Sur to it’s full potential, but the Monterey-Salinas Transit bus does make stops between Monterey, Carmel, and Nepenthe in Big Sur several times a day. For routes closer to Monterey, there is a free trolley which makes key stops in downtown, Fisherman’s Wharf, Cannery Row, and Aquarium of the Bay.

NOTE: Landslides in the spring of 2017 took out several major sections of road in the Big Sur area and have affected trail openings in the state park. Be sure to check road conditions before making travel plans. ALSO: Running on Rt.1/Pacific Coast Highway is not advised. Many sections don’t have a good shoulder.

Some of our favorite runs in Big Sur/Monterey/Carmel, CA 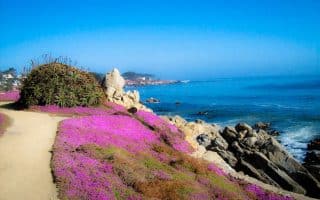 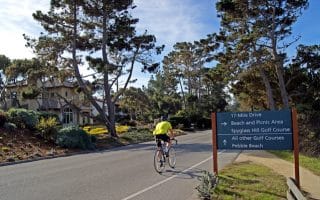 11 mile seaside road between Carmel and Monterey. Wonderful views. It's possible to run along the entire road, but the section with the widest shoulder and great views is 4 miles between Cypress Point and Asilomar.
Explore 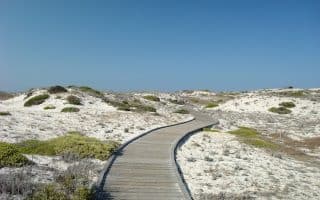 For a quick access beach run just outside Carmel, look no further than Asilomar State Beach, a local favorite for a roughly two mile out and back with amazing coastal views.
Explore 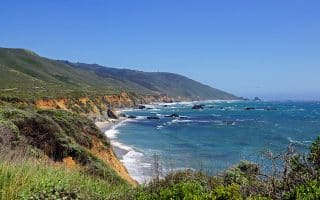 Big Sur is one of the most spectacular gems of the California Coast, and the views are at their best from the Panorama Trail in Andrew Molera State Park, 22 miles south of Carmel.
Explore 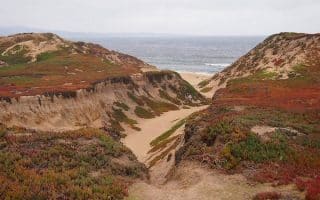 State Park has a 1,500 foot trail to 4 miles of ocean beach with beautiful views of Monterey Bay. Gorgeous dunes. Several miles of roads and trails in the park that are good for running and cycling. The beach is also runnable.
Explore 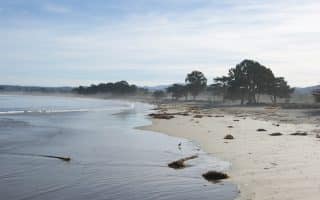 If you favor running on sand, the uninterrupted stretch of beach between Del Monte Beach and Moss Landing is a great route for a roughly 2.5 mile out and back on nothing but gently graded pristine white sands.
Explore 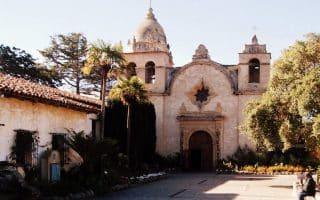 Scenic Road, which runs the length of the coast just above Carmel Beach, is a nicely paved route for running with gorgeous views of the ocean and the high-end homes lining the water.
Explore 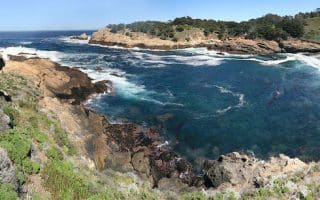 Point Lobos is a popular spot for good reason — it’s one of the most scenic public locations along the length of Big Sur. The Perimeter Loop, which covers about 4.5 miles of the park’s most scenic trails, is in great condition for running.
Explore 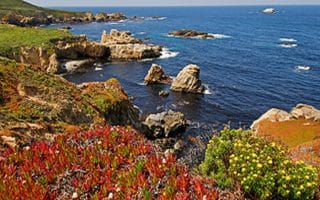 The highest point along the Monterey Peninsula, Jacks Peak is the go-to trail run for locals who want to skip the busier tracks along the coast and still get in some killer views. 500 acres, 8 miles of trails. Hilly but not too technical.
Explore 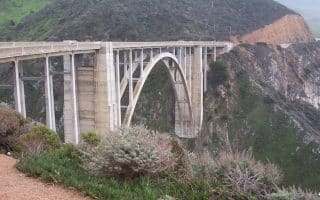 The Old Coast Road is a beautiful dirt track which covers about 10 miles from Andrew Molera State Park in the south to what is now the Bixby Bridge. Fantastic views. Hilly. It's a great alternative to Rt. 1, which is not safe for running.
Explore 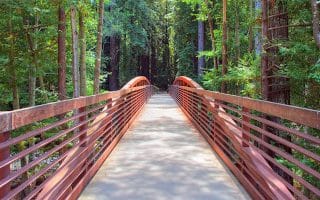 The weather in this area is hugely influenced by the coast. The cool ocean waters keep temperatures more uniform. It rarely gets hot, or cold. Average high temperatures are between 60F and 70F (16C-21C) year-round, about 10F higher in summer than winter. Nights are cool — you’ll need a layer — with lows in the 40s in winter and 50s in summer. Most of the 21 inches of annual rain falls November to March.

Note that wind and fog can be a factor. There can be days of overcast, where one seems to be waiting for the sun to burn through.

This is mainly a tourist area, so there’s a wide variety of accommodations. There’s super luxurious accommodations in Monterey and Carmel, and more budget friendly options.

In Monterey, for the best proximal running, try to stay near downtown or the coastal trail. Most of the hotels in Carmel are downtown, and near a few of our favorite running spots. In Big Sur, there are hotels along Rt. 1.

For lodging and other travel information, visit See Monterey, Carmel California, of the Big Sur Chamber of Commerce.

Fleet Feet Sports has a Monterey location with group runs

The Treadmill in Carmel is a local gem for sports equipment and outdoor fitness knowledge.  Group runs calendar

The Wednesday Night Laundry Runners do their wash and a group run around Monterey weekly.

The Big Sur Marathon is the area’s biggest event, but the same group hosts races throughout the year.