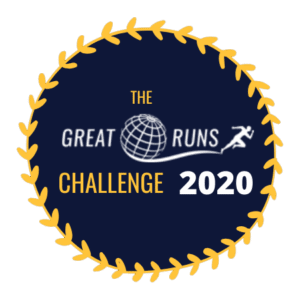 2. Log your runs on your personalized Great Runs Challenge Page. This also displays your total number of locations and routes run. The run/walk must be a minimum of 5 km (3 miles) to qualify.

There are three achievement categories

All are based on annual achievements

There are two types of rewards

Modeled after the ‘Yellow Jersey’ for Stage winners in the Tour de France, the Great Runs ‘Golden Jersey’ will be awarded to the location and route leaders at the end of each quarter. 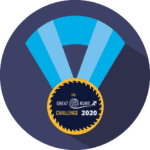 Great Runs Challenge Medals will be awarded to participants who reach any of the following annual milestones:

The Top Location Leader for each quarter gets a custom guided running tour for up to two people courtesy of Go! Running Tours. See their website for a list of running tour locations.

The Top Route Leader for the first 6 months receives a guest appearance on the How Was Your Runs Today podcast to discuss your experience with hosts Bryan Gould and Peter Villa.

The registration fee is $65 USD. No matter when you register, your fee covers you through December 31, 2020.
Any unique location covered by Great Runs. Most locations are ‘cities’, such as Atlanta or Tokyo. Some locations are ‘regions’ or ‘areas’, such as The Berkshires, Provence, or Chicago Suburbs.
Any Great Runs route that’s listed in a location. For example, in Atlanta, there are 10 routes. In some cases, there are multiple routes in a single post. (i.e. In the North Atlanta post, there are 5 different routes – any of those routes qualifies as a distinct route). You can do all or part of any Great Runs route, as long as the total run is 5 km or more.
Yes, it must be listed as a route in one of our locations. But you only have to complete a minimum of 5 km.
Yes, the route can be run or walked. Speed/time does not matter, as long as the minimum of 5 km is reached for a route.
This is an honor system….we trust you!
Once you’ve registered for the Challenge, you’ll have a personalized Great Runs Challenge/Route Entry page. You’ll sign in with your e-mail address, then enter your route information using our super simple form. The page will automatically display your total number of locations run, total number of routes run, and total distance. You’ll also see a list of your runs, and a graphic measuring your milestone achievements!
There are two Leaderboards. The ‘Locations’ Leaderboard will list the Top 10 Location Leaders in real-time, based on the number of unique locations run. The ‘Routes’ Leaderboard will list the Top 10 Route Leaders, based on the number of total routes run.
Your Great Runs Challenge/Route Entry page will also track you against certain milestones. There are three categories of milestones:
Jetsetter: Based on number of locations run throughout the Challenge. Rewards for those who run at least 15 locations.
Route Hero: Based on number of routes run throughout the Challenge. Rewards for those who run at least 25 routes.
City Champion: Based on number of routes run in a particular city/location throughout the Challenge. Rewards for those who run at least 5 routes in a city/location.
Great Runs Challenge medals will be awarded to those who achieve any one of these milestones.
When you register, you’ll have the option to create a user name, in case you prefer to be displayed anonymously on the Leaderboard. If you qualify for one of the Leaderboards, you may display your actual name or your username with a simple toggle.
We need your address for payment purposes. Also, if you win one of the rewards, we need to know where to send it!
Leaderboard Rewards: The Great Runs Golden Jersey. Given to the top finishers in the Jetsetter and Route Hero categories at the end of each season.
The Top Location Leader gets a guest appearance on the “How Was Your Run Today” podcast.
The Top Route Leader gets a free Running/Sightseeing Tour from “Go! Running Tours” in a city of their choice. (Must be a city with a Go! Running Tours location).
Milestone Rewards: Great Runs Challenge medals will be awarded to those who run in 15 or more unique locations in a season, those who complete 25 or more routes in a season, or those who complete 5 or more routes in a particular location in a season.
You can expect to receive the physical prizes (i.e. T-shirts, medals) within 4 weeks of the end of the season.
You will get to choose a free guided running tour of up to 10 km in any of the cities covered by “Go! Running Tours.” See their website for a list of locations covered. We will connect you with Go! Running Tours so you can arrange the date and location of your guided run.
How Was Your Run Today is a humorous and insightful weekly podcast about running, led by Bryan Gould and Peter Villa. The Route Hero winner over the course of a year will have the opportunity to talk about their running experiences on the HWYRT podcast!
wpDiscuz