No Thanks
Amherst & Northampton, MA 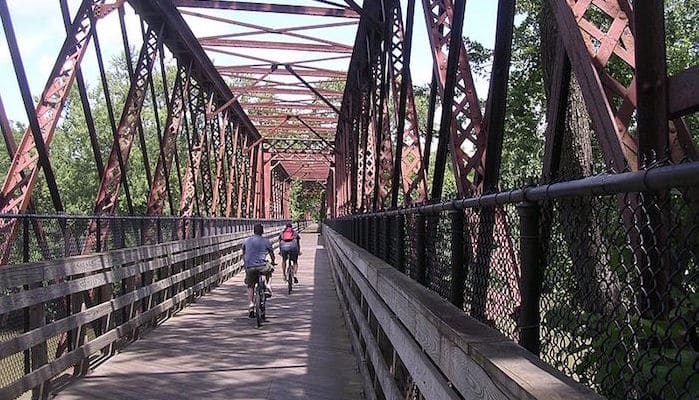 A network of excellent, paved bike trails weaves throughout the Pioneer Valley, and runners are included in the numerous trail users who take to these recreation paths year-round. Three bikeways — all connected — make up the main commuter paths in the Five College area. Hop on any one (or connect them all) for an out and back of your desired length. These paths are plowed in the wintertime, so although they sometimes get icy, they make for decent off-season running.

Norwottuck Rail Trail: The Norwottuck Rail Trail stretches 11 miles (17.7 km) along the former Boston and Maine Railroad, linking Northampton, Hadley, Amherst, and Belchertown. The quietest and most scenic part of the trail is a roughly 3 mile stretch along the east end of the trail from the Fort River access point to the trail’s terminus at Warren Wright Road. This section cuts predominately through conservation land, with great views of the Mount Holyoke range from the Fort River, Brickyard Conservation Area, and Lawrence Swamp. There are several dirt singletrack side trails to explore here as well. Another notable section of the trail is the extreme west end, which crosses over the Connecticut River on a wood planked former railroad bridge. East of here, the trail borders the somewhat congested commercial area along Route 9, but it does cut through some nice farmland as well.

Manhan Rail Trail: After the Norwottuck Rail Trail crosses the Connecticut River, it soon becomes the Manhan Rail Trail, which cuts through downtown Northampton, crosses I-91, and carries on south into Easthampton, where it roughly follows the Manhan River into downtown. It’s about 7.4 miles (12 km) one-way, but the most fun section (in our humble opinion!) is the area around Easthampton’s Lower Mill Pond with its historic mill buildings and manicured greenery.

Northampton Bikeway: Between the Norwottuck and Manhan trails, a third bike path cuts east to west across Northampton, linking the downtown area with the neighborhood of Florence. From King Street (Route 5) in Northampton, the path continues west behind woodsy residential areas to the heart of Florence where it cuts through the lovely grounds of Look Park. From here, the path bends north into Leeds and follows a nice stretch of the Mill River (including a dammed falls) upstream almost to Haydenville.Total is 5.4 miles (8.7 km)

A running tour of the brick-faced downtown strip of North Pleasant Street, plus the hilly campus of... more...

Run the streets of fun and funky NoHo and the Smith College campus with 5 or 7... more...