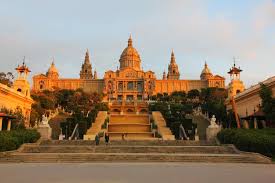 Not far from Barcelona’s main action, Montjuïc is a broad, shallow hill overlooking the harbor. It’s the site of numerous gardens, walking paths, museums, and a castle at the summit. It’s a great place to run in Barcelona, but note that it is very hilly, with lots of switchback roads/paths and stairs. For flatter options, the terrace near the Miramar Hotel, the exercise path at the summit, and the Olympic area are good options. There are many running options here, such that it’s difficult to describe a particular route. The park is well-signed. Some suggestions:

Perimeter Route. An 11 km loop of the park’s main sections, mostly on road. Starting at the centrally located Mirador de Colom, run along the waterfront, head into the garden park, and then do the switchback roads up to the Montjuic Castle. Then, pass by the Botanic Gardens (option to add on here by going into the park), and the Olympic complex (detour possible here too). The second half of the run takes you by the Maragall Gardens, the National Art Museum and the Miro Foundation, and the Greek Gardens.

Garden Paths  Stairs to Summit. From C. de Palaudaries entrance, run along the gravel, switchback-y garden paths, until you reach the terrace by the Miramar Hotel. A nice run there through gardens and along the terrace, with great views. Then use the stairs/paths to get to the summit.

Olympic Area. Follow the ‘Ronda Verda’ signs to the Olympic Stadium area. A good run to get there, and nice running in that area.