No Thanks
Belfast, Northern Island 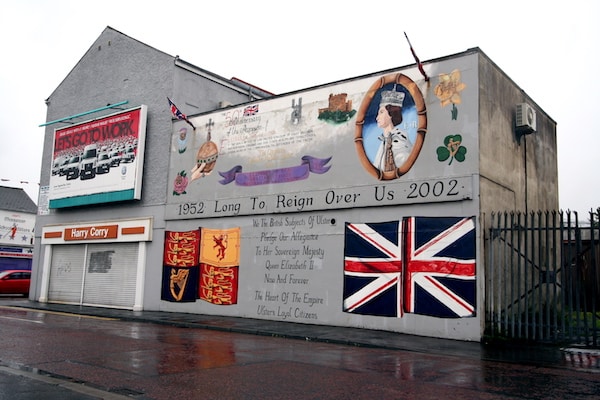 A historic running tour of west Belfast, where one can get a true sense of some of the conflicts that have divided the city. You’ll run along the Falls Road, which remains an Irish Republican area, Shankill Road, which is a more Union/Loyalist area, and the Peacewall along Springmartin, which separate the two roads. City Hall is an appropriate place to start this 11 km tour. From College Ave., run in the A501, which turns into the Falls Rd. This is a route through the heart of west Belfast, and the Republican stronghold. Follow the so-called Lower and Middle sections, for 3.3 km,passing the International Wall murals, Irish Republican History Museum, Bobby Sands Memorial, and Dunville Park. RIGHT on

Whiterock Rd., then RIGHT on the A55 briefly to Springmartin, where a left turn takes you
along the Peace Wall dividing Falls and Shankill. Turn RIGHT on Ballygomartin, for a little over 1 km, to Woodvale Park. Run through this nice green space onto Shankill, which you’ll take for ~2 km. Shankill turns into Peters Hill, crossing the A12 and Millfield, where you’ll turn RIGHT on Royal near St. Anne’s Square, back to the start. This road through working class Belfast was the scene of many violent incidents during the time of conflict.

More Scenic Option: A prettier section once off Falls Rd. is to continue PAST the A55 on White Rock, then onto Ballygomartin, where the road is narrower and quite pretty, with nice views of the Belfast Hills. Adds about 1 km.