No Thanks
Bend, OR 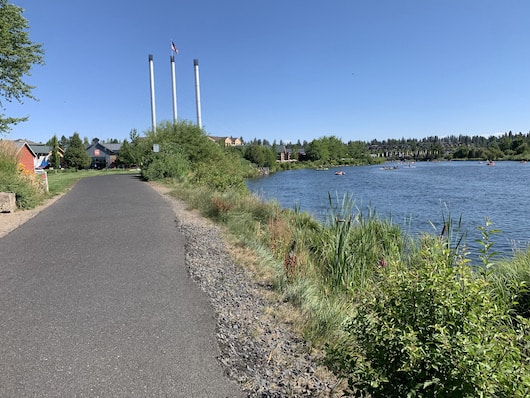 The Deschutes River Trail System is the crown jewel of the Bend Parks and Recreation Department’s Urban Trails System. The multi-use path is next to the beautiful Deschutes River, winding from mostly pine trees and hard-packed dirt through a couple of deciduous sections, around groves, meadows, and past a few class-four rapids. It’s rolling gradual headed out of Bend. Once fully developed, it will consist of 19 contiguous miles of trail alongside the river, but today there are 11 miles of completed sections, not all contiguous. The various sections of the trail are known as “reaches,” which are characterized by neighborhoods and surrounding landscapes. This is the Central section — see the Deschutes River Trail: River Run Reach for the outer sections.

Central Section. The most central, park-like, and easy to follow section of the Deschutes River Trail is the 2.5 miles from Drake Park downtown, south to the end Farewell Bend Park. There are numerous pedestrian bridges crossing the river, but the path is most seamless on the east side. Just south of Drake Park, there’s a short on-road section along NW Riverfront St. Just south of there, in the Whitewater Park/Old Mill area, it’s fun to see the white water rafters, tubers, and surfers negotiate the rapids! In this area, there are paths on both sides, with Riverbend Park on the west side and Farewell Bend Park on the east side. There are multiple loop options, especially between Old Mill and Farewell Bend Park. We’ve mapped a 5-mile loop incorporating the pedestrian bridges.

All Bend, OR Routes