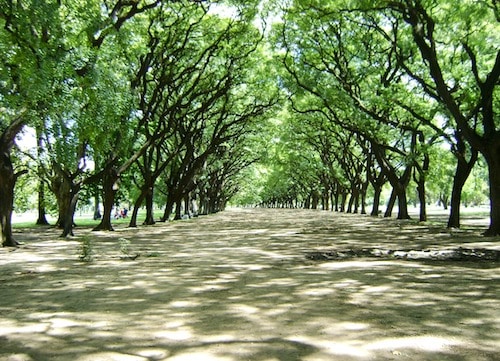 Of over 250 parks and green spaces in the city, Parque Tres de Febrero, or Bosques de Palermo is Buenos Aires’ largest and most popular. The 980 acre park includes a lake and the Rosedal de Palmero, a rose garden, which features over 8,000 roses and 93 different species as well as El Jardín de los poetas, a tribute to literary greats. Close by are the Japanese Garden and the Buenos Aires Zoo. The park is popular for locals and tourists alike, attracting those wishing to bike, roller skate, walk, and jog around the grounds. It is centrally located, near several major museums and sites. Running in Bosques de Palermo is popular. For running, the park includes both main roads and pathways. We put together a map covering the main sections of the park, covering nearly 7 km, but best to design your own route. It’s about 1.8 km north-south, say from Plaza Alemania to the Lake, or east-west, from Plaza Italia to the Planetarium. The roads have wide sidewalks, and some have a big lane dedicated to bikers and pedestrians. Some of the paths have uneven footing.

The park is accessible by bus, with stops at multiple locations within the premises. Visitors can also take the Subte Line D and hop off at the Plaza Italia stop with a short walk down Av. Sarmiento until they reach Av. Libertator.