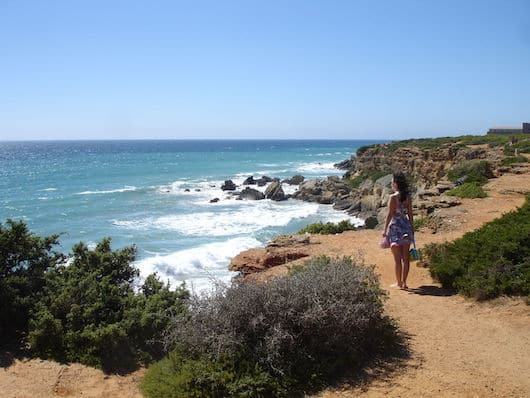 There is gorgeous running in the Cabo de Roche area, featuring cliffside trails with great views of the Bay of Cádiz, and additional paths that turn inland and weave through pine forests. The trails in the area are also known as theAcantilados de Conil. The trails are a mix of narrower and wider, but the footing is generally food. There are some steeper paths leading down to the water and dramatic beaches, and some rocky trails along the water as well.

A good place to start is at the Mirador Faro de Cabo Roche (lighthouse & observation deck). From there, it’s 1.5 km north to the Cala del Pato, mainly along (and mostly above) the water. You can also run on a path south to the Parque de la Atalaya. About half this section is on paths above the water, and the other half is on a hard sandy road alongside the Playa de la Fontanilla. In the area of the  lighthouse, there are numerous additional trails above the water that turn inland, meandering through pine forests — look for signs that say Sendero de Roche (sendero=path). There are kiosks with maps.

There are some scenic spots to run in the Marismas del Odiel, a large estuary and marshland... more...