No Thanks
Chennai, India 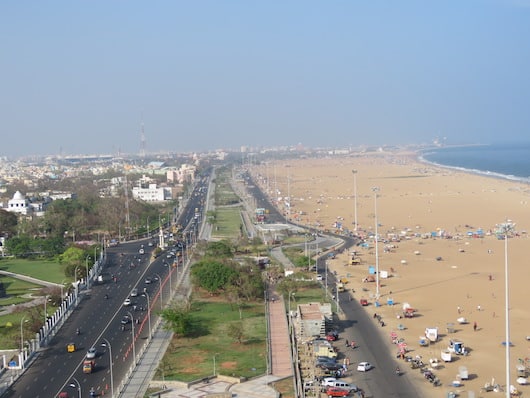 Marina Beach is the signature run in Chennai. This busting urban beach along the Bay of Bengal has a promenade that runs from the Labour Statue at the Dr. MGR Memorial, south for 5+ km. The Marina Beach promenade is alongside Marina Beach and Ghandi Beach, and then it turns into the Foreshore Estate Promenade south of there, terminating at a series of churches and the ‘broken bridge’.  For a longer run, one can run northbound for ~2,5 km, across the Napier Bridge, to the impressive buildings of St. George Fort, the University of Madras, and Victory War Memorial. We’ve mapped the full 14 km route including the Promenades and extension to the fort.

The whole area is an active scene, with lots sites, street vendors, an active fish market, animals, and the a variety of sounds, smells and colors. Heading south, you’ll pass some impressive sights including an old tall lighthouse, which has been transformed as a viewing platform, and the St. Thomas Basilica. The main road alongside the beach is busy, so the most peaceful time to go is early. The beach itself is wide, and possible to run on as well but not optimal.

Thanks to Pekka Myllyla of runaroundasia for his help with this route and his photos.

There is some good running just west of Marina Beach along the Adyar River, and west of... more...