No Thanks
Christchurch, New Zealand 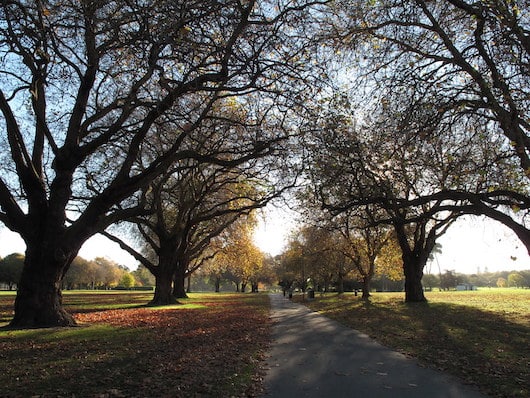 Hagley Park is a classic urban park, featuring numerous paths for walking and running, a botanical garden, a small lake, and other sports facilities. This large green area is an important part of Christchurch’s city center fabric and only 1 mile from the heart of downtown.  One can easily put together a run of 10 km or more incorporating the paths of North & South Hagley Park, and adding the Botanical Gardens. Really pretty in autumn!

A route of the perimeter paths of North Hagley, which rings around a golf course and a section along the Avon River in ‘Little Hagey Park’, is 4 km, although there are some grand interior paths to enjoy as well. There’s also a 17-station fitness course. South Hagley features numerous exercise facilities, and the Hagley Oval. A perimeter loop is 3.7 km. Combined perimeters is ~ 7.7 km.  For the Botanical Gardens, there are ~2 km of lovely paths. A good place to start there is the Canterbury Museum/Archery Lawn. And if you’d like to run from downtown, we’ve included a 1.6 km one-way route along the Avon River from Victoria Square, passing the Bridge of Remembrance.

Add-Ons: Route from downtown (1.6 km from Victoria Square. Other paths along the Avon River. Botanical Gardens.

North Hagley is also site of a Parkrun.

A green and pleasant river run of nearly 12 km, from central Christchurch to the estuary in... more...

A green and pleasant river run of nearly 12 km, from central Christchurch to the estuary in... more...