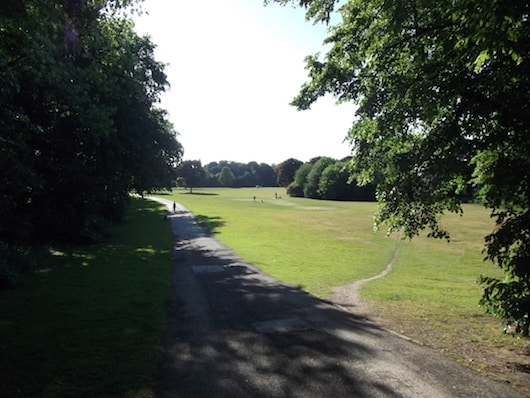 In the 20s, the City of Cologne created the “Inneren und Äußeren Grüngürtel“, the inner and outer green belt, on the premises of former fortresses. The Outer Green-Belt Park (Äußeren Grüngürtel) is in the southern part of Cologne, just west of the Rhine river paths. There are great paths for running in the park, a combination of wooded trails, open meadows, and a pond. A full run of the paths, including the 1 km of trails through the Rosengarten heading west from the river, is 6.3 miles. We’ve mapped out a route. You can also access the park from the Zollstock Zollstockgürtel transit station just to the north.

Add-On: For a  longer run or variety, head north from the Äußeren Grüngürtel along park paths with the cemetery on your left, into Vorgebirgspark. Adds 3.5 km (2.1 miles) one-way.