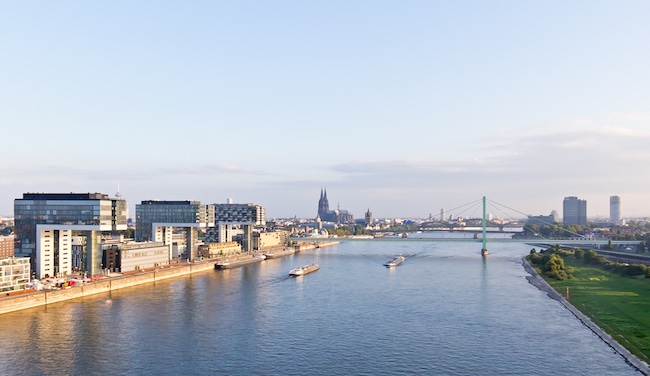 This is another route option along Cologne’s Rhine River paths, this one heading south. It’s a little more park-like and there are fewer bridge crossings. The best paths head for up to 5 km (3 miles) south from Deutzer Bridge (Brücke) to the Rodenkirchen. We’ve included a table with loop options.

Our route starts in central Cologne, on the western side of the river at the Deutzer Bridge (Brücke). Almost immediately, cross over to the Rheinauhafen, a waterfront promenade with modern, dramatic buildings and many shops, offices & eateries. Chocolate Museum and Olympic Museum right next to each other! There are options to run right along wide waterside path or along pleasant pedestrian paths lined with trees and interesting buildings on either side. There is some cobblestone surface here.

It is 2.4 km to the South Bridge (Südbrücke) at Friedenspark and 5 km (3.1 miles) to the Rodenkirchener Brücke. Cross over there, and run on the east side, where there are paths along several fields. Cross back over to the west side at the Severinsbrücke or the Deutzer Brücke. The full loop is 11.5 km (7.2 miles). For a longer run, see our north route.