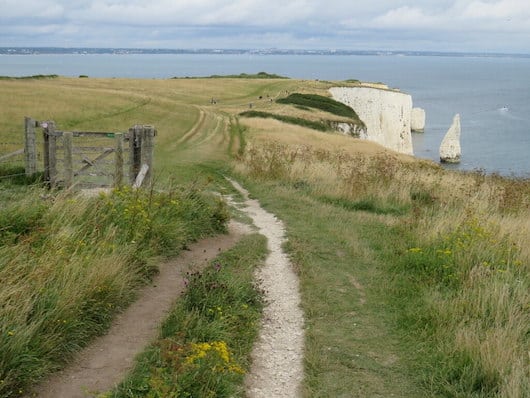 Among the coastal towns in Dorset, Weymouth has some of the best options for running: A promenade path along the sweeping harbour, path around the Lodmoor salt marsh, the Rodwell multi-use trail, and the S W Coast Path for trail runners. Our two main routes can be combined for a longer run. Note: Chesil Beach is pebbly and not great for running.

Esplanade and Lodmoor Preserve. This is a gorgeous run along Weymouth’s sweeping harbour. Start at the Pleasure Pier and run north along the Esplanade promenade path 2.1 miles to the end, enjoying the festive atmosphere and great views of Weymouth Bay. Then, you’ll do a 1.5 mile loop around Lodmoor Preserve, which has scenic paths passing a large reedbed, open water, saltmarsh, and wet grassland. It’s a popular birding area. Retrace your steps to the start.

Weymouth Pier & Rodwell Trail. This can be done standalone or combined with the Esplanade route. Starting at the Pleasure Pier, explore the paths along the north and south sides of the Quay for ~1 mile. Then, run out to the Weymouth Pier and then the paths through Nothe Gardens and the waterfront path along Newton’s Cove. Next, connect to the Rodwell Trail using the tree-lined Bincleaves Rd. Run south for 1 mile on this paved multi-use trail on a former rail bed, to Smallmouth Bay. Then retrace your steps, crossing Chickerell Rd. and continuing north for 1 mile to the Westham Bridge, crossing back into the center of Weymouth. Conclude the run with a brief jaunt along the marina.

Terrific seafront promenade runs along the beach for up to 7 miles between Southbourne and Sandbanks. Great... more...