No Thanks
Miami, FL 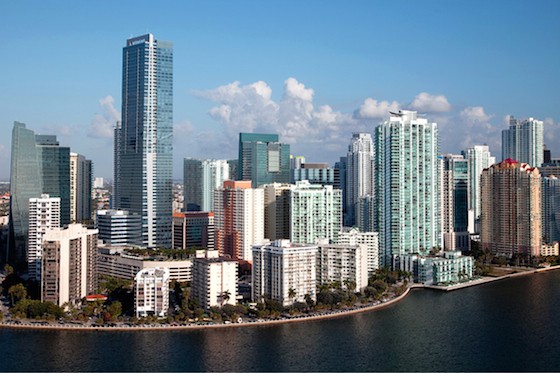 The running options in downtown Miami aren’t fantastic. It’s congested and car-centric, with hotels and apartment buildings blocking what could be a more seamless and scenic waterfront route. However, it is possible to put together a decent waterfront run of several miles, with a few less pleasant connection points. We’ve broken our route into three parts, which can be done as a longer run or in sections. The longer run is ~6 miles, between Rickebacker Causeway and MacArthur Causeway /Maurice A. Ferré Park. One option: run the 6.4 miles from Rickenbacker Causeway north to Maurice A. Ferré Park and take the light rail back!

Brickell Point to Maurice A. Ferré Park. 2.8 miles one-way. This is the nicest and most seamless section. From Brickell Point, take the scenic Brickell Ave. Bridge, and then run along the Miami Riverwalk to the Bayfront Path and through lovely Bayfront Park. Then, loop around the American Airlines arena and continue along the water on the Baywalk Path to Maurice A. Ferré Park. Longer run: connect to our Venetian Causeway route.

Riverwalk Path. 1.1 miles one-way. This path runs on the north side of the Miami River, from Bayfront Park to just past the 2nd Ave. Bridge. There are a couple of interrupted sections. One can also run on the south side of the river, but not the whole way. This path is a bit of a work in progress, with continued improvements/expansion, but also construction requiring detours.

There are several bridges and long causeways connecting the unique geography of the Miami area. The most... more...

Key Biscayne is an island connected to the southern part of Miami, connected by the Rickenbacker Causeway.... more...