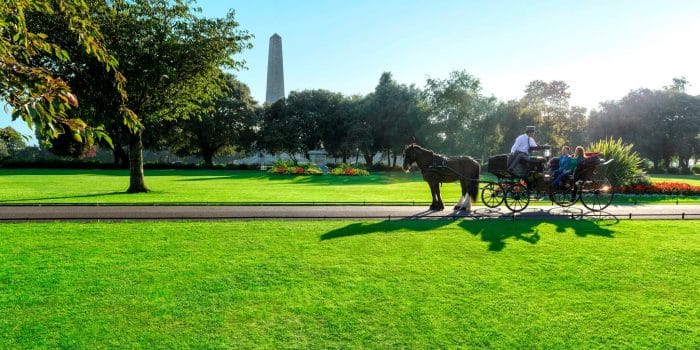 At 1,750 acres, Phoenix Park is one of the largest walled parks in Europe. It is the signature green space to run in Dublin. There is a wonderful mix of fields, alees with tree-lined paths, and interesting sites. We don’t proscribe a particular run in Phoenix Park, but the perimeter wall is 11km around and it is possible to put together some 20km within the park. It is 2.6 miles from one end of the park to the other along Chesterfield Ave., with the Phoenix Park Monument approximately half way. It’s ~2 miles east-west. Sites include the Dublin Zoo, U.S. Ambassador’s Residence, Ashtown Castle (site of Visitor’s Center) dating back to the 15th century, and Áras an Uachtaráin, official residence of the President of Ireland.