No Thanks
New York City - Manhattan 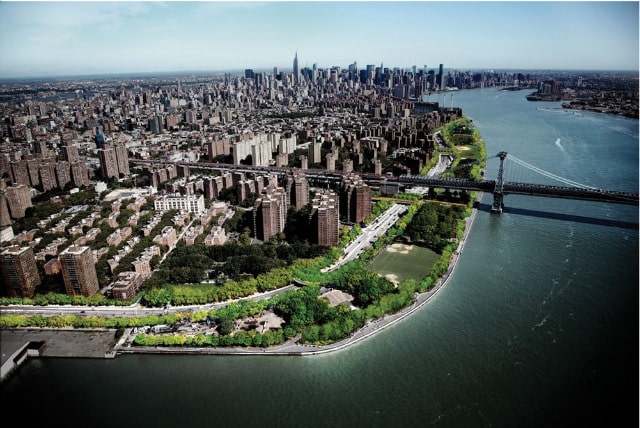 The East River Greenway is another car-free esplanade on the waterfront on the East River. It stretches from Battery Park in the south to 125th Street in north, about 9 miles, with a 1.2 mile-long gap between 34th Street and 60th Street where busy First and Second Avenues are needed to get around United Nations headquarters. The gap is currently under development and it is expected to be fully completed by 2024(!).

We have divided the route into two sections, one is north from the UN and the other to the south. Especially pretty at sunrise. Much of the path is lit!

1. East 34th St.-Battery Park. 4.4 miles one-way. A wonderful run from mid-town to Battery Park at the southern tip of Manhattan. The main parts of this route are the East River Waterfront and East River Park, where you can enjoy great views of the East River, Manhattan Bridge, Brooklyn Bridge as well as Brooklyn on the other side of East River. Toward the northern part, run through Kips Bay, Stuyvesant Cove Park, and brick paved Captain Patrick J. Brown Walk. Most of this run is along a seamless waterfront path, well-signed. Skyline views heading north, and bridge/Statue of Liberty views heading south. Add-On: Wrap around the tip and run on the Hudson River Greenway

2. East 34th Street-East 125th Street. 5.0 miles one-way. This part of the East River Greenway consists of East Harlem, Carl Schurz Park and Upper East Side, and it tends to be less crowded than below East 34th Street. Enjoy spectacular views of the north end of Roosevelt Island and its lighthouse. You will also see western shoreline of Randall’s Island as well as the Robert F. Kennedy Bridge and the Willis Avenue Bridge. It is possible to run over to Randall’s Island — which is nice in theory but there is quite a bit of construction.

As of today, the northern part of the route is only open between 74th and 113th (or 73rd and 114th?). You’ll have to hit local streets to bridge the gap downtown, and I’m not sure if it’s open . And it’s very nice running on Randall’s Island now!

One of the great runs anywhere, with paths, piers, & parks along the Hudson River on Manhattan's... more...