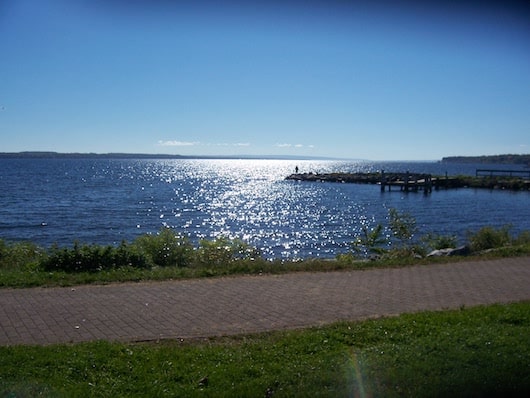 Seneca Lake State Park. This is one of the best places for an off-road lake view run in the Finger Lakes. Easily accessible from Main St. in the center of Geneva and the lakefront hotels, a trail runs for 2.7 miles one-way with water views the whole way. Nice swimming beach in summer. MAP For a longer run, the Cayuga-Senca Canal Trail (below) is a perfect add-on!

Cayuga-Seneca Canal Trail. This flat, gravel trail follows the canal from the northeastern end of Seneca Lake to Waterloo. It’s 4.5 miles one-way, with plans to add more. Alternates between wooded and canal view sections. Do this run standalone, or it’s a perfect add-on to Seneca Lake State Park! ROUTE MAP

Sampson State Park. One of the best options for flat, off-road lakeshore running in the Finger Lakes. Comprising 2,000 acres, this park on the eastern shore of Seneca Lake has two trails: Lake Trail, is 3.5 miles one-way along the lake; and the 6.5 mile (return) History Trail, with marked sites along this former Naval Training base which was built in the 1940s.  TRAIL MAP