No Thanks
Hamptons, NY (The Hamptons) 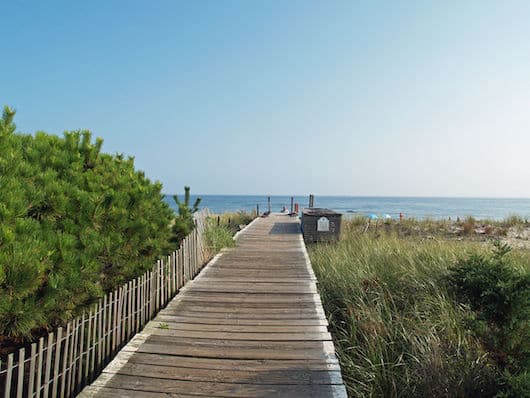 Fire Island is the large center island of the outer barrier islands parallel to the south shore of Long Island, New York. It is a popular recreation destination. The island is 32 miles long — 26 miles are controlled by the Fire Island National Seashore and 6 miles by Robert Moses State Park.  It is car-free, except for access via Robert Moses Causeway on its western end, and by William Floyd Parkway (Suffolk County Road 46) near its eastern end. Access is also via numerous ferries.

Fire Island is large and quite wild. The best running spots in the National Seashore section are on the western end of the island. Among the highlights is a series of boardwalk trails. There are also several trails and roads that are good for running, but have varied surfaces. The beach, while extensive and beautiful, features mainly softer sand and might not be great for running. Below is a list of some recommended running spots.

Robert Moses State Park. At the western end of Fire Island. 5 miles of shoreline, multiple nature trails and sand trails. Some good running spots. Sand trails might be too soft for running. MAP