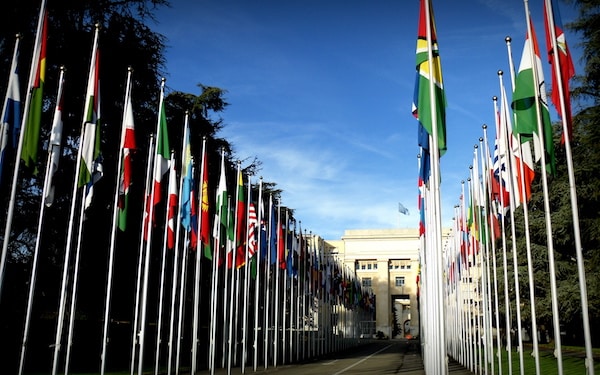 This route combines parks, the Botanical Garden, a tour of the UN, and some hillside farms. It can be a standalone run, or combined with a longer route involving the north shore of Lake Geneva.

We start in the series of parks on Lake Geneva’s north shore, near the Museum of the History of Science (Parc Barton). Run along the lakeshore path or the park paths, and then under main road that crosses into the Botanical Garden. Take a loop around the garden, along the Avenue de la Paix, and then run by the train station over to the UN complex. Running on the grass between the flags of the United Nations is quite stirring, as you enjoy the park area around the UN building — Ariana Park, and the Museum of Ceramics and Glass. After a loop around the complex, join the Route de Pregny and head up the hill, past the Red Cross Museum, to the the Geneva School of Diplomacy. You’ll be rewarded with great views! At the GSD, you can make your way down the hill along the Route de Pregny, which is sort of switchback-y, passing some grander homes, fields, and farms. The Chemin des Chèvres will take you down to the Route de Lausanne, and back along the lake for the return. It’s a bit of a busy road for 1/2 mile until you reach the park.

Options: For a shorter run, at the Tennis Club off the Route de Pregny, take a right on Chemin de l’Impératrice, down the hill (note: narrow, no sidewalk). You can also run on some of the roads west of Route de Pregny, by some of the major international organizations such as the World Health Organization — but these roads are somewhat businesslike and charmless.