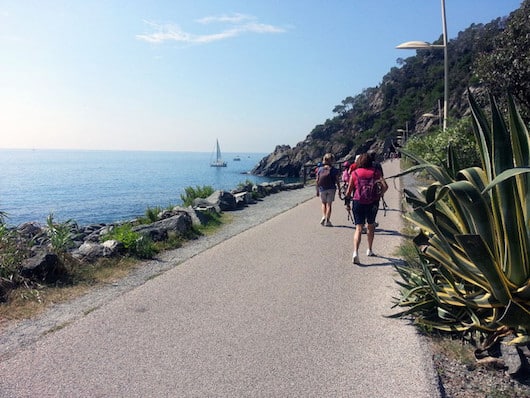 The coastal route from Voltri to Varazze is one of the most scenic, uninterrupted runs in Liguria. Part of the Parco Naturale Regionale del Beigua, this old train route is now a paved, 16 km path right along the coast, with splendid water views the whole way. From Voltri (20 km west of Genoa), head west, starting on the Passeggiata Roberto Bruzzone. The path changes names as it heads toward Varazze, with views of the water and rocks (Scogli Merlini, Nave). The route is rolling hills, with 130m of elevation gain on the 16 km heading west — flattest section is between km 8-12.

Bonus: Run one-way and take the train back. Voltri is easily reachable by train from Genoa. Run along the path and catch the train from Varazze back, or one of three towns along the way: Vesima (km 3.5), Arenzano (km 6.2), or Cogoleto (km 10).