No Thanks
Ghent, Belgium 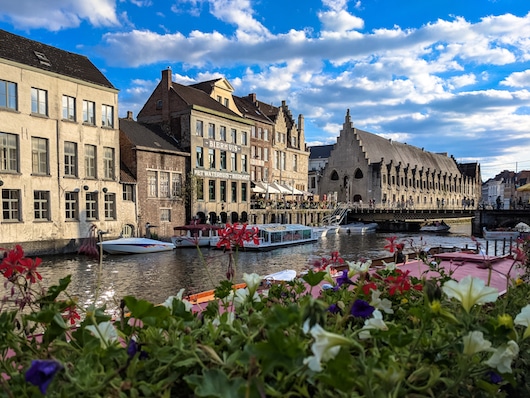 This ‘runseeing’ tour of Ghent passes many of the town’s scenic and historical highlights. The ‘old town’ is mainly a pedestrian area, so you can sort of create your own route there. We start at the dramatic Rabot fort, then make our way south on the pretty Rabotstraat to the St Elisabeth Church Ghent, and the pretty Begijnhof neighborhood. Then, turn LEFT to use Burgstraat over to the Old Town, and the 10th century Gravensteen castle. Take the Klein Vismarkt Bridge across the Leie River, and then continue south on Korenmarkt, Ghent’s main pedestrian square, passing by several of Ghen’t historic sites: Gildenhuis, Justice House, then LEFT on Cataloniëstraat, passing by Saint Nicholas’ Church, Het Belfort van Gent (belfry & tower), and Jan Frans Willems monument.

The next section of our run uses Kortedagsteeg heading south to cross over the water, with the Public Library on your left, then LEFT on Lammerstraat to the City Government complex and the park-like alleys of Acht Mei Plein. Then head south through pretty Muinkpark, then a brief section west on the R40 to Citadel Park, where you’ll do a 1 km loop of this park built in 1875 that sits on a former citadel and is now site of several museums and a lake. For the return section of the run, head east on pretty Olifantstraat to the east side of Acht Mei Plein, where a pedestrian path will head north to the BlANCO Nieuwebos museum and a nice path along the water, for 1 km. Finally, bear LEFT on Volmolenstraat, run by the Sint-Jacobskerk church, the Jacob van Artevelde monument, and the 15-century Dulle Griet canon, which was used in the siege of Oudenaarde.

One of the most popular spots to run in Ghent. Great training around the 5k Watersportbaan loop,... more...