No Thanks
Glasgow, UK 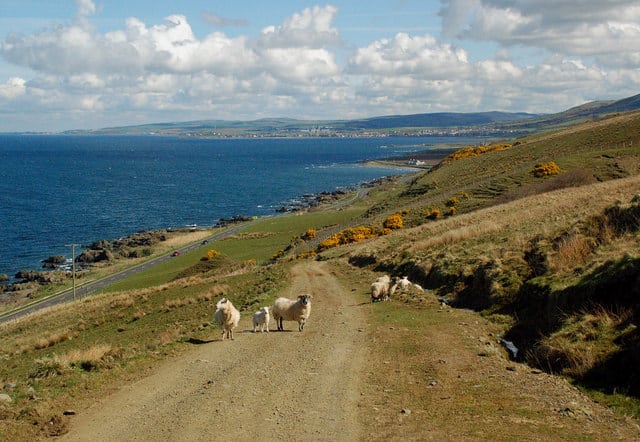 It’s worth the 45 minute train ride from Glasgow to West Kilbride to run on the Ayrshire Coastal Path. This route, submitted by Great Runs user Sean Gillin, follows the Portencross to Largs section of this 100-mile coastal walking path, which in most sections is terrific for easy-to-moderate trail running. The path itself consists of farmland, fields, some wooded sections, and some beach, with great views to the Firth of Clyde and the British Isles. The route is a mix of forest trail, beach and some road. It can be done one-way, as there are train stations at West Kilbride, Fairlie, and Largs.

We’ve selected the Portencross to Largs section, as it’s one of the gentler sections of the path, and accessible via train from Glasgow. Start at the train station of the village of West Kilbride in Ayrshire. A path runs off Main St., heading downhill through Kilbride Glen for 1 mile, which is a lovely forest with a river running through it. You’ll come out to the back of an old Victorian schoolhouse before heading downhill on Chapelton Ln. Cross Ardossan Rd. to join the Ayrshire Coastal Path, turning RIGHT to head north. The path follows the beach for the next 10+ miles, passing a golf course, Portencross Castle (3.4 miles, brief section on road), Three Sisters, and the Hunterston Power Station (5 miles). Here, the path turns inland and is mainly a roadside cycleway for 5 miles through Fairlie (train station). Just north, at Kelburn Castle, the path branches off the road toward the coast for the final 2 miles to Largs. Note: there might be some sections, such as just south of Portencross, where the trail is submerged at high tide…generally you can access the A78 as an alternative.

We love this route that criss-crosses the River Clyde on some of Glasgow’s most interesting architectural feats.... more...