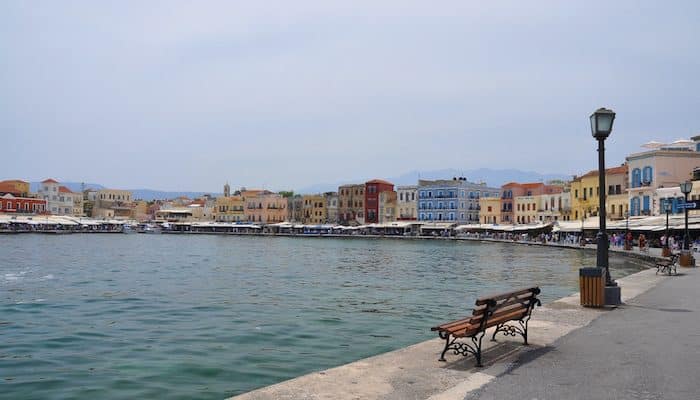 As the largest of the Greek Islands, Crete offers a beautiful diversity of coastal cities, the towering White Mountains, and some of the most significant cultural heritage in the country. Running on Crete is a treat: in each of the island’s main cities — Chania, Rethymno, and Heraklion — runners will find a great waterfront path. Trail runners will also delight at the cross-Europe E4 path, which crosses the 320 km east-west length of Crete. 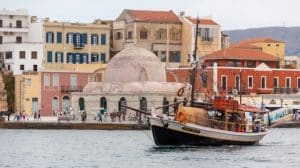 Kountourioti Coast (Chania): This run around Chania’s harbor puts the emphasis on great water views, with a good dose of sightseeing and people watching mixed in. Our route forms a large crescent around the port, beginning at the Talos Square public parking area and eventually arriving at the scenic Venetian lighthouse. Start by heading west from Talos Square on the smooth stone path towards the Firka Fortress. Keeping the water to your left, continue south towards the Maritime Museum of Crete. The car-free stone walkway passes a bustling row of shops and restaurants before reaching a corner and turning sharply left. Continue north on the Akti Tompazi to the Old Venetian Harbor, where it turns right and becomes Akti Enosios. At the end of this path, turn LEFT to follow a cool narrow stone pathway out to the lighthouse. With this as the turn around point, an out and back is about 4 km. LONGER OPTION: the Akti Karani, heading west from Talos Square, has a nicely kempt sidewalk for about 1 km to Nea Chora Beach. From here it’s possible to continue onto Selinou and the Kladissos Beach path. MAP. 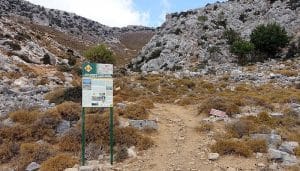 E4 Path: The European Long Distance Path, better known simply as “E4,” winds 10,000 km across the continent, beginning in Portugal and ending in Cyprus. 320 km of that trail bisects the island of Crete, making this Greek island one of the top choices for hiking and trail running. Note: some sections of the trail, including the famous Samaria Gorge, are rated only for expert trail runners. Other sections share paved roads with cars, so should only be run with caution. However, there are several happy-medium lengths of trail which utilize dirt roads and less-technical paths, making them ideal for running. The team at CretanBeaches.com has put together an extensive guide to the trail, which is helpful in selecting a suitable running route near you. Some good-to-run sections, which are detailed in their guide, include the coast from Elafonisi to Paleochora, the Agia Irini Gorge, the Koudoumas Trail to Saint Anthony cave, the Heraklion vineyards from Arhanes to Argarothos, and piney dirt roads from Prina to Vasaliski. Whichever route you take, follow the yellow and black E4 markers to stay on the trail, and be sure to carry plenty of water and sun protection. 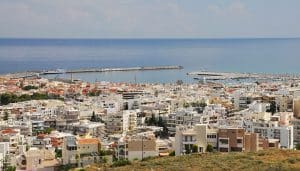 Rethymno Sea Walk: Runners on the Rethymno side of Crete need look no further than the easily accessed, ~5 km coastal boardwalk of this beach town for a great route. This wide, stone paved seawall walkway is bordered by lovely trees and gardens, easy beach access, and stretches of bouncy boardwalk. Start at the monument on Leof. Martiron Maiou and head west. The path is a little tough to follow in the area surrounding the Rimondi Fountain. It’s best to turn RIGHT on Arkadiou and pick your way past the shops before the sidewalk bends LEFT onto Leof. Emmanouil Kefalogianni. Here, the nice walkway resumes and continues around the bluff of the Fortezza Castle. The sidewalk narrows, but remains runnable with great views until roughly the St. Nicholas Church. ~5 km one-way.  MAP. 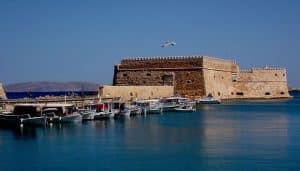 Heraklion: The capital city of Crete offers some of the best running on the island, with a lengthy traffic-free promenade stretching from near the Heraklion Airport to the El. Venizelou Bridge over Rema Giofiros — about 6 km one-way. The once industrial capital has recently refurbished its harbor area, resulting in a wide, stone paved running area with great water views. The nicest section is the western 2 km section of path, from Historic Museum of Crete to the bridge. However, the path continues east along the bustling marina towards the airport for another 4 km.  MAP
Add-On/Alternative Run: Just east of the Museum, there’s a path along a pier, passing Rocca a Mare Fortress out to a lighthouse, ~5 km out and back.

Plakias Trail Run. 8 km loop, 200m gain.  A scenic, hilly run from this town on the south coast of Crete, with great views of mountains to the north and the Libyan Sea to the south. A mix of gravel road and some tougher trail sections. Starting from the town of Plakias, take the rocky trail with the crossing over a small river followed by a steep climb past the remains of an old water mill. After this rocky climb, the path continues over rocky terrain and gravel with magnificent views over Plakias Town. The track continues downhill following a quiet road. Before you get to the last part of this run there is another short rocky trail through an Olive grove leading you to the beach. With the sea on your left you’ll run towards Plakias town again. Our thanks to Wouter Reith for this route!  ROUTE MAP