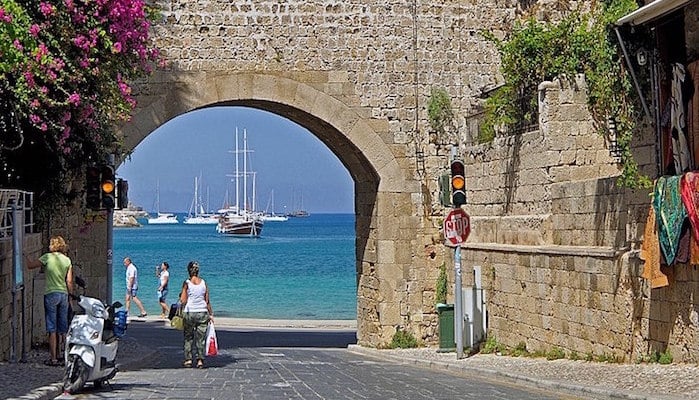 Rhodes, to the south of Marmaris, is the largest and capital of the Dodecanese islands. Famous for its Colossus of Rhodes (one of the seven wonders of the ancient world, which was destroyed in an earthquake) and its medieval old town, Rhodes offers tourists an array of archeological sites and stunning beaches. Running on Rhodes includes the unique former moat around the Old Town walls and the gorgeous Rhodes waterfront. The island is 85 km north-south and 50 km east-west.

Old Town Moat: The fortification of medieval Rhodes still stands strong today, though the moats surrounding Old Town have been repurposed into a 3.5 km circuit of smooth dirt paths featuring lovely gardens and great views of the city walls. It’s possible to start anywhere along the loop, but the Gate St. Athanasius near Parko Andrea Papandreou is an easy landmark. If running the route clockwise, you’ll arrive at the Freedom Gate in about 1.5 km. From here, you can continue on the interior of the walls (which are sometimes chock full of tourists), or along the Akti Sachtouri sidewalk on the exterior. It’s difficult to lose the way — just follow the walls around! Pop back onto the moat path at the Roman Triconch Building and continue west past the medieval theater and the Red Door to the start. Go early to beat the crowds! MAP.

Rhodes Waterfront: As a continuation of the Old Town Moat run, or as a route of its own, the waterfront sidewalks and pathways surrounding the harbor coastline are another great run in Rhodes. On the east end, pick up the sidewalk near the Rhodes marina and follow Afstralias around the small beaches and Old Town walls to Akti Sachtouri. The path here widens, and surfaces vary from concrete to boardwalk to gravel as the route slips onto the moat path and out to Pl. Eleftherias. Follow the waterfront to Elli Beach and around the bend at the Rhodes Aquarium. Then, take Kalimnou/Akti Miaouli/Ialisou south the cliffs. Here, a smooth dirt path splits off and continues along the water to Sirene Beach, where it becomes a sidewalk again. The sidewalk is intermittent and in less great condition here, so the end of the beach is a great turn-around point. From the start, it’s a flat 16 km (10 mile) out and back. MAP.