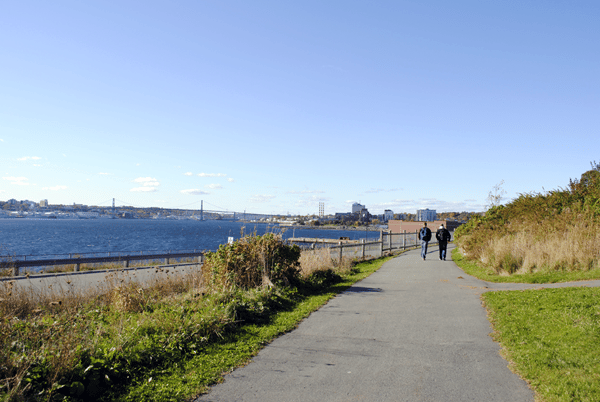 On the eastern shore of Halifax Harbour is Dartmouth, part of the Halifax Regional Municipality (HRM). One can drive or run over the Macdonald Bridge from Halifax (~1 mile), or take the Alderney Ferry to downtown Dartmouth or the Woodside Ferry to Woodside Park. The ferries take 15 minutes and run every 15-30 minutes depending on time of day. The signature run in Dartmouth is to do a ~1 mile loop around hilly, 279 acre Dartrmouth Common, established in the late 18th century for settlers’ use and now called the Leighton Dillman Scenic Garden. Then, there is a terrific waterfront trail around Dartmouth Cove for ~2 miles between the Alderney Ferry terminal and the Woodside Ferry terminal. Great views of the water and Halifax skyline.

Option from Halifax: From downtown Halifax, it’s ~1.5 miles over the Macdonald Bridge to the waterfront trail.  Or, run one way to Dartmouth, and take the ferry back to downtown Halifax (5 miles one way, not including Dartmouth Common). Of course one could start in Dartmouth too.

Note: As of January 2017, the bridge is under construction and pedestrian use is not permitted.