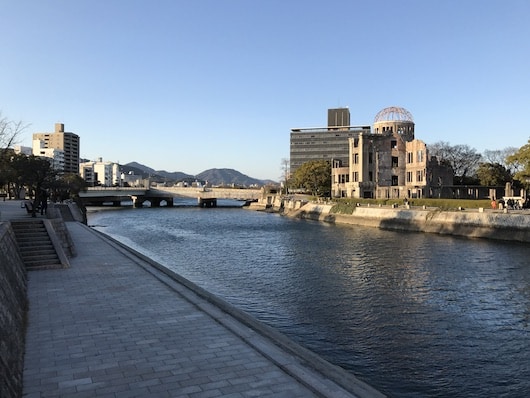 This is a quite remarkable 10k run, consisting of both historic and scenic elements: Peace Memorial Park, Central Park, Hiroshima Castle, historic gardens, a river path, and Peace Blvd.

Start at the Gates of Peace, which is the somber entrance to Peace Memorial Park,  dedicated to the victims of the atomic bomb and advocating for world peace since 1954. We suggest doing a 1.5 km loop of the park — the first section along the somber path to the Eternal Flame of Peace, then a section alongside the Motoyasu River on the east side, crossing the Motoyasu Bridge to the Atomic Bomb Dome. Head north, crossing the main road into Central Park. Run the ~1 km through the park on paths passing a Children’s Museum, outdoor pool, arena, and Hannover Garden. The next section is a ~ 2 km loop around the moat-side park and the island of Hiroshima Castle (Rijō), a recreation of a destroyed 16th-century castle. Then, head east for 0.5 km to Shukkeien, a 16th century garden on the Enko River. Take a jaunt through the garden, and then a little jog around the school to get to the Enko River Path. Turn RIGHT, heading south on the river path for 1.5 km (alternating gravel and paved) to Peace Blvd., at the Tsurumi Bridge. There are paths and gardens along the median of this historic road, which heads west from the Enko River to the Motoyasu River, using the Heiwao Bridge to cross over to the Gates of Peace.