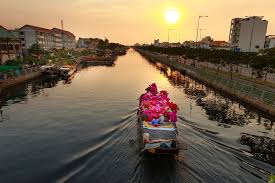 There is some decent waterside running in Ho Chi Minh City, taking advantage of the Saigon River and various canals. A couple of recommendations below. Note that in most sections there are busy roads alongside…so it might not be fully bucolic.

Option 1: Saigon River. In District 1, there’s a ~3-4 km of decent sidewalks/paths, recently improved, along the Saigon River. The best section is from the Meridien Hotel, near the zoo, and heading south to the ferry terminal, past the Harbor Garden and the Ho Chi Minh Museum. For more, head away from the river and along the Bến Nghé canal for ~4 km. Generally, there is a path/sidewalk along the water here. It’s not exactly bucolic…but it’s runnable.

Option 2: Nhieu Loc – Thi Nghi Canal. One of the best dedicated running paths in HCMC – nearly 14 km out and back! Path runs in Districts 1 & 3, from the Dien Bien Phu Bridge (near the Saigon Zoo), winding north/west to for 7 km the end of the canal. Pass Lotus Temple Chùa Pháp Hoa, about 4 km. Can continue for another 3-4 km to near the airport. Decent path most of the way, some good shade, and nice landscaping. In most sections there are paths on both sides of the canal, so loops are possible.