No Thanks
Houston, TX - Central 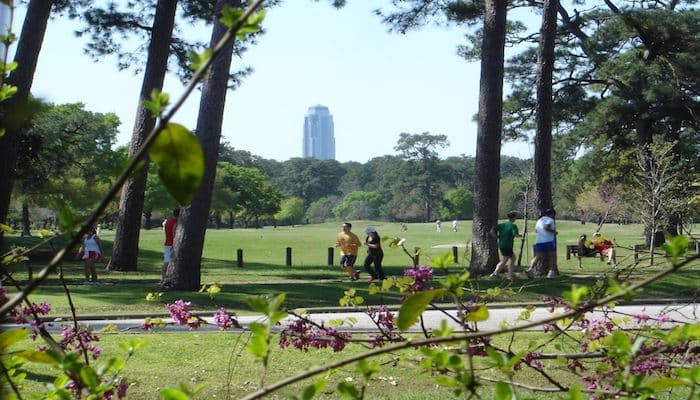 Memorial Park is a 1466-acre green treasure and one of the largest urban parks in the United States. It is also the heart of Houston’s running community, offering fabulous paths in the greens along with spectacular views of Houston skyline. One can easily put together a 7-8 mile run in the park.  Most of the terrain is fairly wooded. One special feature is that you can change/shower and leave your belongings at the Memorial Park Running Trails Center, located at 7575 N. Picnic Lane.  A few options:

Seymour Lieberman Exercise Trail. A great choice for a “loop” is the crushed granite, 2.9-mile trail at the northern end of the park. The trail is lit and filled with other people running so you can feel safe even after dark. It also well-shaded and has restrooms and water fountains along the way. The route is accessible from all parts of the park, but a good option is to start from southeast corne at the Trails Center.

Running Track. At the northwest part of the route, near to the Tennis Center, there’s a  quarter-mile asphalt timing track and a work-out station for cross-training.

Arboretum. One can put together a ~2 mile loop.

Trails East of the Arboretum. Great off-road running. 3-4 miles of trails east of the Arboretum, west of Wescott. At the South Picnic Loop, the Green Ridge Trail parallels Park Drive for 1.6 miles. There are also other trails that are rated for difficulty: the easy Purple Trail, moderate Yellow Trail, and difficult Blue & Orange Trails.

Note: New trees are being planted and other improvements to the park are underway, as the record drought in 2011 and hurricane Ike have shrank the number of trees in recent years.

love the park and trail! However, unable to find more information about Seymour Lieberman. any knowledge that could be shared would be much appreciated.
thank you