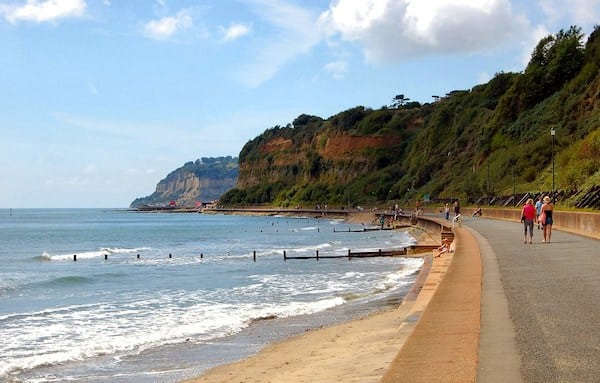 Although much of the coastal running is on the Coastal Path (which is more of a trail run), there are a few sections of flat, paved ‘esplanades’ along the waterfront. Our recommendations:

Cowes Waterfront. 3.5 miles out and back. In Cowes, a lovely coastal promenade extends for 2.3 km west to Gurnard Village, with great views of the Solent. Run on The Parade, and then on the Princes/Egypt Esplanade, passing the Mermaid Sculpture, East Rosetta College, and Egypt Point. Add-On: in Cowes, pop up to Northwood Park and the green campus of the adjacent Enterprise College. ROUTE MAP

Ryde Waterfront. A scenic seafront promenade runs from Ryde east to Seaview. Almost all of this is on a dedicated waterfront path, with great views. It’s 3.5 miles, including a jaunt out Ryde Pier (1 mile out and back).

Shanklin to Sandown. 5.7 miles out and back/loop. On the east coast, there’s scenic waterfront running between Shanklin and Sandown, with great views of the water and cliffs! There’s a terrific option for a loop, using a paved path along the water one way, and then a cliff-top path (Ferncliff Path/Cliff Path) for the other way. The cliff paths are fairly flat and have good footing. Access the path in Shanklin near the Shanklin Chine and the Sandown Path near the Dinosaur Isle museum. ROUTE MAP

Ventnor. Just 4 miles west of the Shanklin promenade is another nice paved esplanade in Ventnor. This coastal resort town is build on steep cliffs overlooking the sea. A paved path runs along the water for 2 miles from the end of Shore Rd. near St. Boniface Church west to the Ventnor Botanical Gardens. It’s mostly along the water, though there’s a section on the Ventnor Clifftops. Add-On: Additional paths in the Ventnor Botanical Gardens and in Ventnor Park.

Colwell. Just north of The Needles area, there’s a 1.2 mile paved esplanade path along Totland Bay in Colwell. It runs between the Old Lifeboat Station north to The Hut restaurant at Colwell Shine Rd. There are nice water views and across the bay to Hurst Castle in Lymington. ROUTE MAP