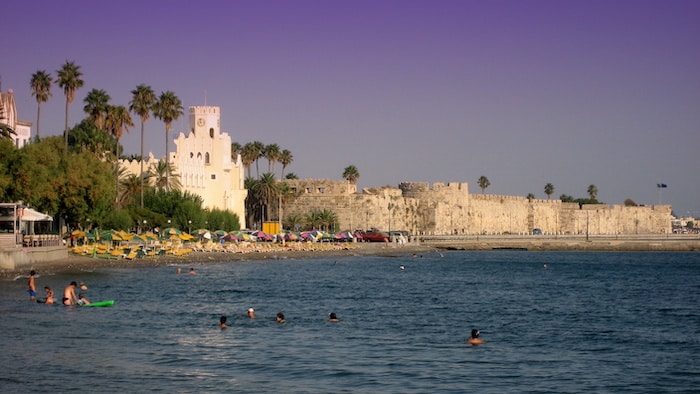 Kos is an island in the Dodecanese archipelago featuring sandy beaches and a number of Greek & Roman ruins. There’s some lovely running on Kos. Below is some scenic waterfront running in the town of Kos, the island’s main town and population center, and in nearby Tigaki. See our other post for routes in the Kefalos area.

Kos Waterfront. We’ve mapped ~12 km of waterfront running in the area around Kos. It’s mainly along a sidewalk, with a few sections of dedicated seafront promenade. Not all of this is right along the water. A few options:

Tigaki. About 10 km west of Kos, there’s some nice waterfront running in Tigaki, including a path around part of Alikes Salt Lake. From the center of the small town, it’s 2 km east along the water on the main road. Nice water views and lots of fun restaurants and bars! (note: no sidewalk). Then run on the path around the lake. It’s a lovely wetlands area, and you might see migrating flamingos and pelicans outside the summer months! The path doesn’t make a full loop — it’s ~2.5 km to the end of the path at Golden Beach.

Kardamaina Waterfront & Hills. There’s ~6 km of nice waterfront running in this resort town near the airport known for its long, sandy beach, which is lined with bars, tavernas and nightclubs. From the center of town, run for 4 km north to Vali’s Beach, and 2 km south to where the waterfront road starts to turn inland.

The Greek Islands are a collection of 6, 000 land masses scattered across the European coast of... more...