No Thanks
Kraków, Poland 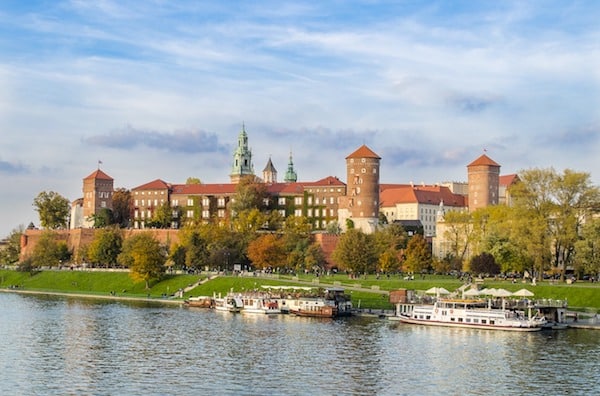 Running on the Vistula River Path in Kraków is a pleasure.  Our “central Vistula” route focused on the 4.5 mile loop between the Grunwaldzki and Kotlarski bridges, nearest the old part of the city. Here, we provide options for longer runs to the east and west of central Kraków, on mostly paved paths. Both start at the Debnicki Bridge, near the Wawel cathedral and castle.

Eastern Route. From Debnicki Bridge, the best running headed east is for 5.6 km (3.5 miles) one-way to the end of Bulwary na Dąbiu (park). It’s just over 3 km to the Kotlarski Br. skirting the Kazimierz neighborhood (old Jewish ghetto, now a trendy neighborhood), 4.5 km to Ofiar Dąbia. The route on the northern side tends to be more attractive with better maintained trails.

Western Route. Can do a loop of up to 20 km (12 miles) heading west of the Debnicki Bridge. We’ve mapped 10 km on the southern side, crossing over on the pedestrian bridge paralleling the E40. It’s 1.6k to the Zwierzyniecki Bridge, 4.4k to the Krakowski Park rope course, and 9.4 km to the E40, where you can cross the pedestrian bridge and return along the northern side. Other than the  Zwierzyniecki Br. there aren’t many crossover options along the way.

Thanks to the long, paved path along the Vistula River, you can run for over 20 miles... more...

Few cities make a runseeing tour of the Old Town as simple as Krakow. With “The Planty”... more...