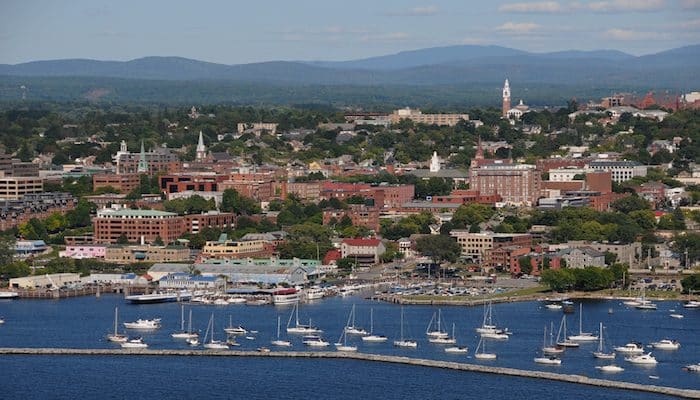 Lake Champlain and mountain views frame Burlington, Vermont’s largest city. Burlington is a hot spot for all types of athletes, because of its outdoorsy vibe, close proximity to the mountains, and endless supply of biking and hiking trails. The Church Street Marketplace is the commercial center of this bustling and compact small city. This is a guide to the best places to run in Burlington, Vermont.

Burlington’s running centerpiece is the 13-mile Island Line Trail along Lake Champlain. There is also a growing network of bike paths, which are great for running. The Catamount outdoor center in nearby Williston and the trails of Shelburne Farms are other area running highlights. Burlington is also home to the Vermont City Marathon, which brings runners from far and wide to race on this gorgeous albeit brutal route. There’s also fabulous running in the Lake Champlain Islands (North Hero, South Hero, Isla La Motte).

Some of our favorite runs in Burlington, VT

The signature running spot for Burlington. It borders the waterfront in the city of Burlington and strings... more... 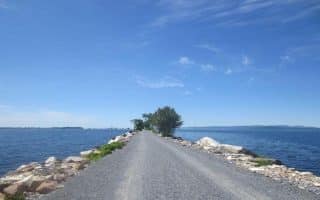 The signature running spot for Burlington. It borders the waterfront in the city of Burlington and strings together several shoreline parks in a linear path to offer spectacular views of Lake Champlain and New York’s Adirondack Mountains.
Explore 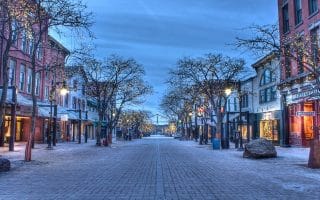 A tour of Burlington's highlights, including Battery Hill, the Church Street Marketplace, and the arts district. Follows 5 miles of the Vermont City Marathon route.
Explore 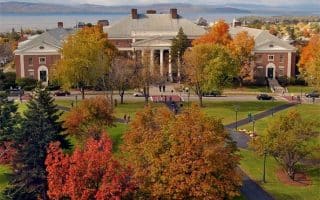 A 5k tour of the University of Vermont campus and nearby paths. Enjoy pretty campus buildings, a farm, athletic fields, and other area highlights.
Explore 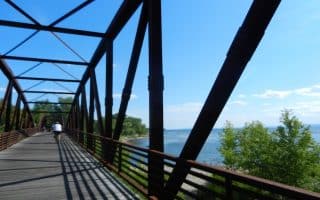 A combination of urban and countryside, covering 7 miles of the 21 miles of paths in South Burlington. A highlight is Overlook Park on Spear Street, which offers stunning views of Lake Champlain.
Explore 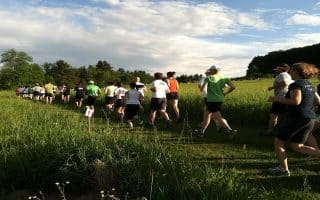 The Catamount Outdoor Family Center is a treat for runners, with over 20 miles of trails. Situated on two hills, with panoramic views of the Green Mountains, the Winooski River Valley, the Adirondacks and Lake Champlain.
Explore 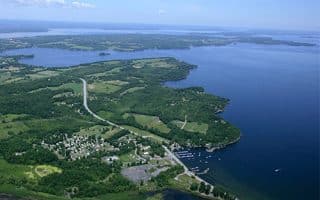 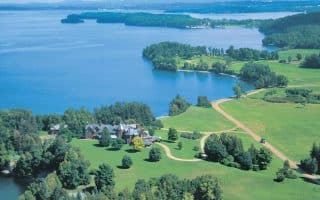 1400 acre working farm, a National Historic Landmark with stunning waterfront views. For runners, there are more than 10 miles of trails. We've put together a loop incorporating the major features at the farm.
Explore

The signature running spot for Burlington. It borders the waterfront in the city of Burlington and strings together several shoreline parks in a linear path to offer spectacular views of Lake Champlain and New York’s Adirondack Mountains.
Explore

1400 acre working farm, a National Historic Landmark with stunning waterfront views. For runners, there are more than 10 miles of trails. We've put together a loop incorporating the major features at the farm.
Explore Weather is a factor in Burlington. Lake Champlain modifies temperatures somewhat but is also responsible for Burlington’s fair share of cloudy days. Summers are pleasant and not too hot with average highs around 80F (26c) and mostly comfortable nights. Winters can be bitter, with average January highs in the high 20s (-5C) and lows close to 10F. Burlington is among the country’s snowier cities, averaging 80 inches a year. So, one must be cautious about surface conditions. Fall is gorgeous. Vermont’s famous foliage beckons autumn running in Burlington. Spring can seem like a long time coming, but the greening up is a treat.

There are three “clusters” of hotels in Burlington: downtown, off I-89 near Exit 14w and along Rt. 2, and in nearby Williston. For running purposes, the best bet is to try to stay at one of the town center hotels, which lie west of S. Willard St. between Pearl St. and Main St. Good bets here are the Hotel Vermont, the Courtyard Burlington Harbor, and the Hilton and Hilton Garden Inn. If you are at one of the hotels near I-89, it’s about 2 miles down to the waterfront. The campus of UVM is near this area, and since you’ll probably have a car, it’s about 3 miles south to the South Burlington Rec Path. In South Burlington, the Green Mountain Suites is a good bet. Note there’s not much for running or staying near the airport.

For a real escape, stay and run/bike on the Hero Islands. The North Hero House Inn on North Hero is wonderful, and so is Adams Landing on Grand Isle.

Fleet Feet Sports is the one dedicated running store in the Burlington area. Their location is in Essex Junction, a major shopping area 6 miles east of downtown. Group runs Saturday 8am. Interval training Thursday nights.

Skirack Run Center: Skirack is a well-known outdoor sports store in Burlington, featuring a Run Center within the store. They provide a comprehensive running shoe fit service, which consists of observing and measuring your feet to establish which shoe will best suit you. Included with this service is a 30-day guarantee that if If you are not completely satisfied with the fit of your running shoes, you may bring it back within 30 days and put the cost of your purchase towards a different pair of running shoes.

There is also a Finish Line running/shoe store in the Macy’s in downtown Burlington.

If you’d like to connect with some group runs in Burlington, here are some good running clubs to check out:

Green Mountain Athletic Association: Since 1976, GMAA has been linked with running in Vermont. With about 400 members of varying ages, skills, and goals, this association unites all those who love to run. GMAA sponsors a full queue of races, from 5ks to marathons, including the oldest continuously held race in VT, the Archie Post Five Miler. The club was even one of the founders, and continuing supporter, of the Vermont City Marathon! Check out all of their sponsored races on their website.

RunVermont. Fantastic resource right in downtown Burlington. They promote a life-long commitment to running. Organizers of the Vermont City Marathon and several other events throughout the year, they’ve developed a host of other services to support running in the community.

Vermont City Marathon. May. A great and popular event.

Green Mountain Marathon. October. Begins and ends near the house where Clarence H. Demar, 7 time Boston Marathon Winner, once lived. It is out and back on the west shore of South Hero and Grand Isle; a land of farms, apple orchards and summer cottages. The terrain is flat to rolling and about half dirt road (hard packed and well maintained). The half marathon course is an out and back that finishes at the Folsom School (same as the full marathon).

Art Tudhope 10k. 10K out and back through Charlotte. This fast course is a mix of dirt and paved roads, along apple orchards, views along Lake Champlain, and the covered bridge at the turn around point. The start and finish is at Shelburne beach.

Half Marathon Unplugged. April. Course begins at Airport Park in Colchester and runs along the bike path to the south end of Burlington. The majority of the course is on the bike path.