Best Places to Run on Cozumel 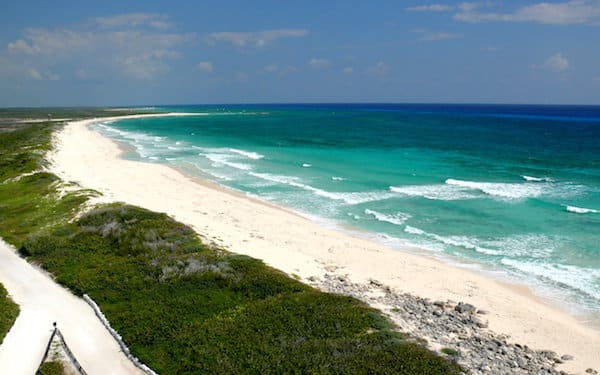 This resort island 12 miles east off the east coast of the Yucatán Peninsula is a popular visitor destination. It is also FABULOUS for running, owing to the 65 km cycle path that was built to replace the old highway and that circles the southern part of the island. There are several lengthy sections with wonderful ocean views. The path on the eastern side of the island is especially spectacular! Our guide to running on Cozumel breaks up the coastal road into three sections, with a focus on the nicest spots. Also included are some of our favorite beaches for running. Cozumel is a 45-minute ferry ride from Playa del Carmen on the mainland.

The best place to run in Cozumel.

There’s some lovely beach running on Cozumel. The beaches aren’t that wide, but generally the sand is firm near the water. Note that tidal differences here are not significant. Note some of the beaches might have admissions restrictions or charge a fee. Our favorite areas for beach running:

It’s also possible to run around the town of San Miguel, where most of Cozumel’s 80,000 residents live. Many of the streets are narrow and don’t have sidewalks, but a leisurely DIY jog around town can be a ‘runseeing’ pleasure. Some of the nicest sections of the coastal multi-use path on the western side runs near San Miguel.

The Transversal de Cozumel is the 14 km road that runs between the west and east sides of the island. It has a good shoulder for most of the way, but it is interior and not as interesting for running.

Some of our favorite runs in Cozumel, Mexico

Winter is drier and less humid, with more sunny, clear days and daytime temperatures averaging near 80F (26C) and occasionally cooler nights. Precipitation can happen at any time of year but occurs more frequently in summer in the form of brief but heavy downpours.

Cozumel’s hotels are located off the main road on the nothern part of the island. There’s a cluster near the ferry terminals & San Miuguel, a little further south, and the northern part of the island near the golf course. There aren’t any hotels on the east side. Runners will have to drive or take a bus to enjoy some of the running on that path.

One of the more famous Ironman triathlon races is held every November in Cozumel.