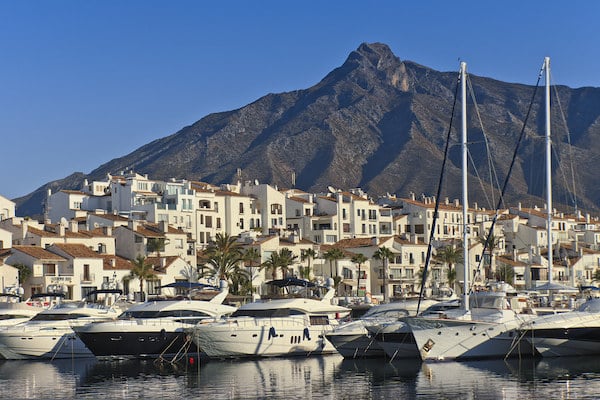 Puerto Banús, located a few km west of central Marbella, is one of the Costa del Sol’s upscale spots, known for its yacht-filled marina, ‘Golden Mile’ commercial area, scenic waterfront paths, and luxury homes. We’ve put together two routes celebrating these highlights, which can run standalone, in different sections, or combined for a spectacular 19 km run. Bonus: Much of waterfront path is lit at night!

Route 1: Puerto Banús Marina, Waterfront Path East, ‘Golden Mile’. 10.5 km
Start at the centrally located Av. José Banús, and run on the median path toward the marina. Do a loop of the marina, which is ~2.5 km including a jaunt out to the pier. Then, take the seafront promenade heading east. This is a festive and attractive waterfront path Galong Puerto Banús beach, lined with luxurious foliage, great views to the sea, attractive homes and luxury hotels. After 2 km, you’ll do a little loop of the eastern end of the Golden Mile (use Conjunto Jardín Andaluz), featuring the Puente Romano hotel, historic Romano Tennis Club, and lush landscaping. Then, return to the start. Option: continue even further east on seafront path to Marbella.

Route 2: Waterfront Path West, and River Paths. 8.4 km (5.2 miles) out and back
Start at the centrally located Av. José Banús, and run on the median path toward the marina. Head west on the waterfront path, Arrabal a Cañas-F Rodeo, for 2 km to the end (some sections are wooden boardwalk). At the end, head north on the Paseo Fluvial Ramón, a walkway alongside the narrow Río Guadaiza that goes for 2 km north to the U.D. San Pedro Stadium. Retrace your steps to the start. Option: seafront path continues for another 2 km west to the Playa de San Pedro de Alcántara.

Add-ons: Waterfront path continues east toward Marbella for several km, or west of the Río Guadaiza for another 2 km to the Playa de San Pedro de Alcántara.

The promenade heading west from the center of Marbella for up to 13.5 km to Playa de... more...