No Thanks
Minneapolis-St. Paul, MN 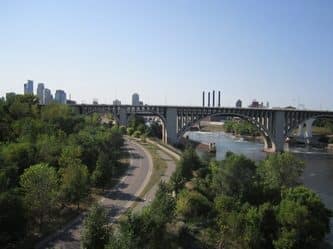 The paved paths go along the historic and mighty Mississippi River from the Ford Bridge to the Washington Bridge, along the West River Parkway and East River Parkway. There are plenty of bridges along the way so you can easily criss-cross them and make as long of a loop as you want. It is no surprise either that part of Twin Cities Marathon course goes along the Mississippi. The views are spectacular on both sides, arguably the best views being from Franklin Bridge to the north. We recommend starting at Plymouth Ave. near downtown Minneapolis and including Stone Arch Bridge. You are treated to great views, with Guthrie Theatre and the old Mill City to the west bank, looking over the St. Anthony Falls. The only downside is that paths are not so well connected north from the Washington Bridge, so you’ll need to incorporate some road.

It is also possible to continue south of Riverside Park along West River Parkway, as far as Minnehaha Park — about 4 miles. The road has some water views, and a dedicated path in parts