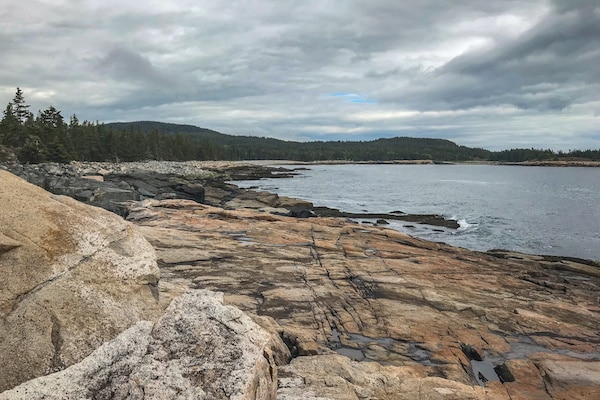 This area was recently saved from development, and is now owned by the National Park Service. Over the past few years, trails have been added to this new section of Acadia National Park. The park entrance is 1 mile from Rt. 186. Recommended running options in this area:

Schoodic Loop Road. This one-way loop road is 6 miles and runnable. Not much of a shoulder, and water views are more from designated turnout points. But this is a less developed part of the island, so traffic is not too bad – go early or off season! For a challenge, there is a narrow gravel road near West Pond Cove that leads to Schoodic Head, at 440 feet the highest point on the peninsula.

Bike Paths. There are 8.3 miles of bike paths on the peninsula. The Schoodic Woods Campground is the anchor point for these paths, which range from easier around the campground to steep and winding in other sections.

Grand Loop: Do Schoodic Loop Road and then take the bike path back east to the campground.

Note: Shuttle Buses in summer can help you do a one-way run and return to the starting point.

Our guide to the best running in Acadia National Park. Includes best sections of the 27-mile Park... more...

Bar Harbor is the main commercial area of Mount Desert Island and the gateway to Acadia National... more...