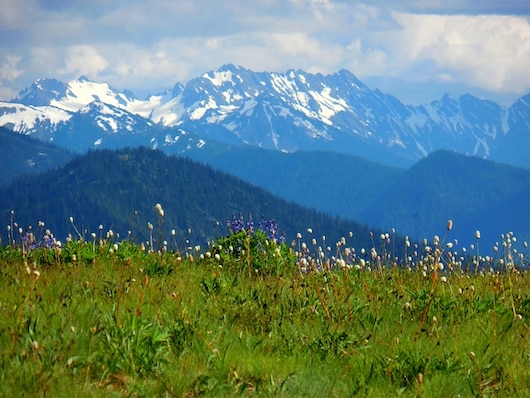 One of the closest national parks to a major metro area, the 1 million acre Olympic National Park has an incredible diversity of terrain, featuring snow-covered mountains, lush rain forests, and dramatic coastal terrain. Port Angeles, located 82 miles west of Seattle, is the gateway to the Park. For our guide to running in Olympic National Park, we focus on the most runnable roads and easier trails, featuring a cross section of the park’s dramatic scenery.  PARK MAP

The best off-road running opportunity in Olympic NP. This site has fantastic information on the trail, with detailed maps that divide the trail into four sections. The far eastern section is 27 miles between Port Townsend and Blyn (7 miles on trail, 20 on road), features scenery of the Strait of Juan de Fuca and Discovery Bay. The ‘river and prairie’ section is between Blyn and Port Angeles (26 miles).  After a gap in the trail just west of Port Angeles, the trail picks up again with 5 miles along Lake Crescent, and then a more forested 18 mile section west to Sappho. There are plans to extend the trail west to the coast in La Push. TRAIL MAPS

A good opportunity for a trail run on a trail that doesn’t have challenging footing is Olympic Hot Springs Rd. The paved road is closed due a washed out bridge. The road starts in Elwha, just of the Olympic Highway (101). From the Elwha River Observation Area, follow Olympic Hot Springs Rd. south, up to 10 miles. It’s fairly flat for the first 4 miles, then begins a serious climb at mile 5 (1,500 feet over 3.5 miles, grades of 8-12%). If you do the full 10 miles, you’ll be rewarded by a soak in the hot springs (our thanks to Aurélie Vilmer for the suggestion. She did the full out and back in 4:30…impressive!). At the 4-mile mark you also have an option to take Whiskey Bend Rd., which goes for another 4 miles and is less steep than Olympic Hot Springs Rd. Note: As of Fall 2020, the bridge is washed out — there are good signs for a bypass trail.

A section of the Discovery Trail, which overlaps with the Spruce Railroad/Crescent Lake Trail runs along the northern side of Lake Crescent for nearly 8 miles. Mix of terrain, from dirt to gravel to paved. Some sections are more open lake views, others more forested with glimpses of the lake. A highlight is the view at Devil’s Punchbowl. For the flattest section, focus on the 4-mile Spruce Railroad Trail, which follows a former rail bed Highway 101 runs along the southern end of the lake, but has no shoulder. Note: Sections very hilly, with a couple of long, steep climbs.

Huge area of protected coastline, with miles of rugged beach. It’s possible to run along the beaches, but the sand can be soft, depending on season/tides. Best to follow the tide line. Good sections include: Rialto Beach to Hole-in-the-Wall and further north; and Second Beach, 1.5 miles with great views of sea stacks. There is also some more rugged trail running here, notably the South Coast Trail from Third Beach to Oil City (up to 17 miles).  Use tide tables and caution.

The best bet for a rainforest run in Olympic National Park is the Hoh River Trail, a popular path lined with giant cedars, firs and maples. The first 12-13 miles are which is fairly wide and flat, with good footing (Run to Five Mile Island for a 10 mile out and back!). After the ~12 mile mark, the trail becomes more rugged and steep, as it starts ascending Mount Olympus. Another, option in the area is Hall of Mosses Trail (1.6 miles out and back). It’s also possible to run on the Upper Hoh Valley Road, west of the Visitor Center. Note: the trails are popular and can get crowded. If you want to run it, go early or during off-peak times!

Can run for up to 7 miles along Dosewallips Rd. Start at the ranger station/campground

For a long, fairly flat run, we recommend Dosewallips Rd. in the eastern section of the park. This is an old road (not accessible to cars), so it’s wider with fairly good footing. From the Ranger Station/Campground, one can run for up to 7 miles along Dosewallips Rd. alongside the Dosewallips River. Sites along the way include Dosewallips Falls and Dose Forks Bridge. Note: Some sections of the road might be washed out.

Sol Duc Rd. is ~14 miles between Highway 101 and the Sol Duc Campground. Hilly!  Lovers Lane Trail is a 6-mile loop.

The Sol Duc area is in the interior of the park, ~15 miles from the western end of Lake Crescent. There’s some decent running, in mainly forested terrain. Road running options include Sol Duc Rd., which has no shoulder but relatively little traffic. It’s a hilly road, climbing uphill into the park from Highway 101 or downhill from the Sol Duc area heading northwest. Another attractive running option is the Lovers Lane Trail, a 6-mile loop. Lovely, canopied forest. Best to go early as the trail can be popular.