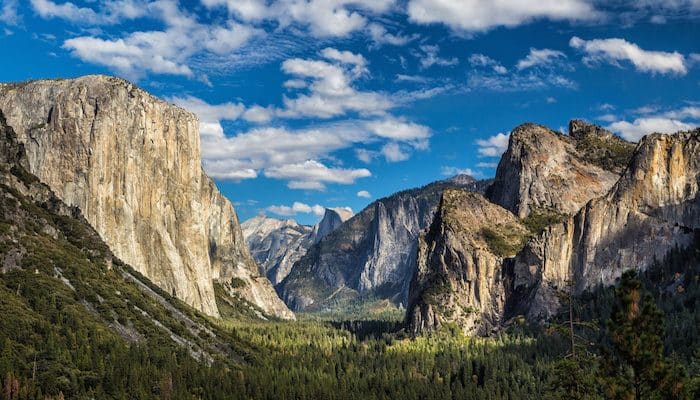 Yosemite National Park is located in the central eastern portion of California and encompasses the western slopes of the Sierra Nevada mountain chain. The park is best known for its waterfalls, but within its nearly 1,200 square miles, there are deep valleys, grand meadows, ancient giant sequoias, a vast wilderness area, and much more. Most visitors spend the majority of their time in Yosemite Valley. All of the roads in Yosemite are scenic, but the most famous is the Tioga Road, typically open from late May or early June through November.

Especially during high season, we do not recommend running on the main park loop road, as there can be constant cars and there’s very little shoulder. However, the 11+ mile Valley Loop Trail is a fantastic option for running in Yosemite Valley, and parallels the main road much of the way.

Yosemite has a Mediterranean climate, meaning most precipitation falls during the winter, and the other seasons are nearly dry. Temperatures vary greatly throughout the park due to the dramatic elevation changes. In Yosemite Valley, summer brings average highs of 89°F and lows of 57°F whereas winter brings highs of 48°F and lows of 29°F. Winter precipitation is significant, with an average of 5-6 inches per month from November through March. At elevation, much of this is snow. In fact, snow pack keeps many of the park’s roads and trails closed, from November-May.

Over 12 miles of paved bike and walking paths are available in Yosemite Valley. This multi-use path takes you through scenic meadows and the beautiful pine forests of the valley. A good place to begin your run is at Half Dome Village (formerly Curry Village), which also has restrooms and food. The bike rental area has good information on the bike trails of Yosemite Village, which are your best bets for running.  You can begin your run from here or use the shuttle bus to access your desired starting location. Or, do a one-way run and use the shuttle bus for the return.

This is a great, relatively gentle trail running option in Yosemite. It’s a mostly level, gravel trail following many of the Valley’s first east-west trails and wagon roads. The trail parallels most of the major park loop road within Yosemite Valley. The trail passes through meadows, talus slopes at the base of the granite cliffs, and near the Merced River. There are views to El Capitan and several falls. You can access the trail from many places throughout the Valley; however, the mileage and description used here starts at the Lower Yosemite Falls area, which is near the Yosemite Lodge. Route description from the National Park Service here. The footing can be tricky in spots — occasional sand, tree roots, and rocks, but this is not a technical trail run. Note the trail can be snowy and slippery in winter, especially on the south side.

For a real cardio workout, run/walk up the trail to these falls. Referred to as “Nature’s Grand Staircase”, the Mist Trail is a steady uphill climb, rising 1,000 feet (300 meters) over 1.2 miles to Vernal Fall, and 2,000 feet over 2.7 miles to Nevada Fall. From the trail head at Happy Isles, the trail is paved for the first section, and then gets into a series of stairs built out of rock.

Note that this trail can be very busy during high season, and might be too crowded for running. We recommend going early to beat the crowds. Also, the stairs/rocks can be slippery when wet, and icy in winter.

For a nice warm-up and to add nearly 1 mile each way, run from Half Dome Village to the trail head at Happy Isles.

Located in the western part of Nevada, Reno is known for its hotels and casinos, as well... more...