No Thanks
Newport & Jamestown, RI 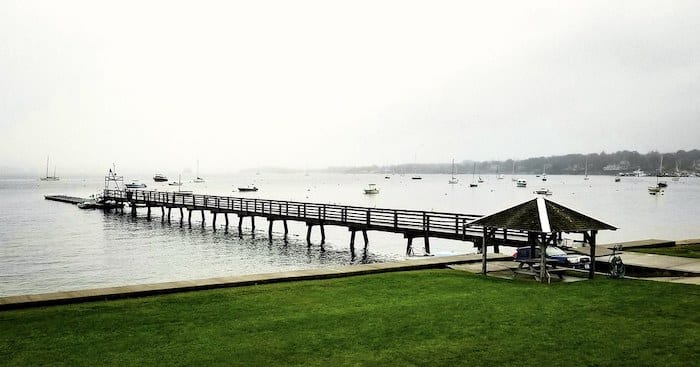 Jamestown, the second largest island in Narragansett Bay, is located 5 miles from Newport using the Claiborne Pell Bridge or from Kingston using Jamestown Bridge. It’s a popular summer colony, home to farms, three state parks, and numerous small beaches. With a population of only 6,000, there’s not a lot of traffic, so running on Jamestown’s roads is generally safe. It’s ~9 miles north-south and ~1 mile east-west. Below are our recommendations on the best places to run in Jamestown, which can be mixed & matched. Notes: Pedestrians aren’t permitted on either of the two bridges to Jamestown. Most of the main roads on Jamestown don’t have a sidewalk/shoulder but there’s generally not too much traffic. Also, there’s a seasonal Ferry from Newport.

Best Run with Ocean Views. The most scenic stretch for running in Jamestown is along Canonicus Ave., near the small historic center on the island’s east side. From the center of town, head south as far as Fort Wetherill Rd. and north to the Jamestown Golf Course. There are great water views, and some gorgeous homes. For a longer run, do a loop around Fort Wetherill State Park, which has great views. In town, it’s enjoy the shops, restaurants, and nice homes along Narragansett Ave., which runs for 1 mile between the east and west sides of the island. It’s also fun to explore some of the quiet residential streets near town.  ROUTE MAP

Fort Getty Park & Beavertail State Park. A nice run on generally quiet roads, mixing some historic spots and coastal views. From the parking lot at the park, it’s a ~1 mile tour of the walking paths, with some nice views. Then run out Fort Getty Rd. for a nice stretch along Sheffield Cove. We’ve included a jaunt out to Conanicut Battery Historic Park.

For a longer run, combine Fort Getty with Beavertail State Park. It’s 2.5 miles along Beavertail Rd. — quiet, not that scenic until reaching Beavertail SP — but there are some nice spots at this former coastal defense site, with a lighthouse, great coastal views, and some shoreline trails to explore. ROUTE MAP

Fort Wetherill State Park 10k.  From town, we’ve mapped a 10k loop out to Fort Wetherill State Park. Begin by running south along Canonicus Ave., which turns into Wolcott Ave. After 0.8 miles, LEFT on Racquet Rd., for a nice jaunt along the shore, leading into the Park (2-mile mark). A tour of the park’s roads/trails is ~1 mile, with additional options to explore the rocky shore. To make the run a loop, take Fort Wetherill Rd. out of the park and turn LEFT onto Highland Dr. There are a few homes along this road, but not too much else. After 1.5 miles, you’ll reach Hamilton Ave., where we’ve included a quick LEFT to see the views of Sheffield Cove, then the final 1 mile along Southwest Ave., which has a sidewalk, back into town via the windmill at the Jamestown Historical Society.  ROUTE MAP

This route is famously known as a public access walk that combines the natural beauty of the... more...