Run the White Cliffs of Étretat 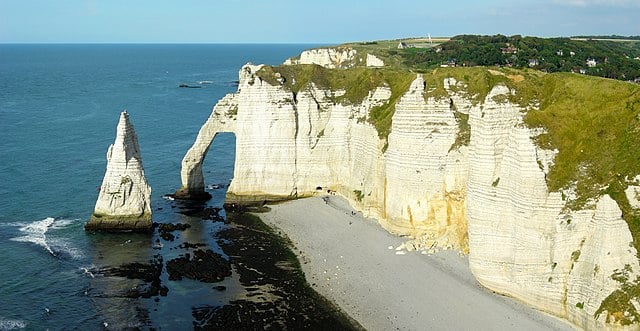 Running along the bluff of the white limestone cliffs of Étretat is one of the great running experiences in Normandy. Located 15 km south of of Fécamp on the Côte d’Albâtre, Étretat is known for its striking rock formations carved out of its white cliffs, known as Les Falaises, with grass and dirt paths extending either direction from town affording fantastic views. The paths are popular for hiking/trail running — not very steep, like wide dirt roads in some sections and narrower in others. Starting in town at the Tourism office, we’ve mapped routes that head north and south. From town, there’s a short but steep climb to the top of the cliffs which can be avoided by starting on one of the paths.

Paths Headed North. There are paths extending north for nearly 8 km to Le Nez in Vattetot-sur-Mer. There are dramatic views of the sea, the cliffs, the open windswept landscape, and farm fields in the interior. After 1 km you’ll reach the Chapelle Notre-Dame-de-la-Garde and La Falaise d’Amont. Continue for as many km as you like! The surface is grass/dirt, and once atop the cliff it’s fairly flat.

Paths Headed South. Headed south from town run along the seafront promenade and access the paths at the south end of the beach. We’ve mapped 5 km to Cap d’Antifer — this direction is a bit hillier. There are great views and dramatic sites along the way, including the Porte d’Aval (arch), Pisseuses of Valaine, and L’Œil du Panda, with beaches below (Plage du Fourquet, Plage, d’Antifer).

Étretat Waterfront Promenade. A promenade path runs for 0.5 km along the beach, with great views of the water and surrounding cliffs.

Nice running in this popular seaside resort. One can do a ~7 km waterfront run around the... more...