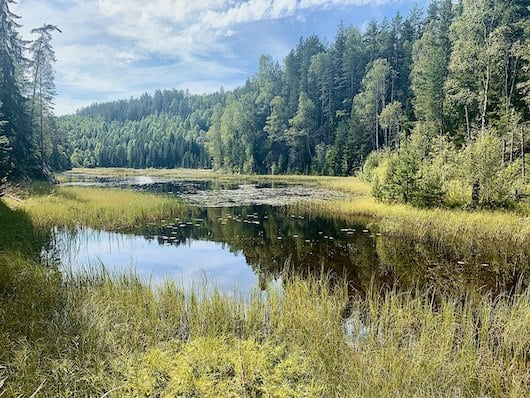 Østmarka and Nordmarka are two large forest parks within relative proximity of Oslo. Each is accessible by public transport. They’re known as hiking areas, but they’re also popular for easy to moderate trail running. Both the areas featuring generally well signposted trails — some of them marked for level of difficulty, as they’re popular in winter for nordic skiing.

Østmarka. Huge forest with large network of trails — some wider, others more narrow. It’s impossible to describe particular routes and we haven’t found a good online trail map. The easiest access from Oslo is to take Metro line 2 to Ellingsrudåsen. From there, a taste of the forest is a trail run towards the Mariholtet Sportsstue. Here’s a link to a trail description.

Nordmarka. Large forested region to the north of Oslo. By transport, access via Metro Line 1 to Frognerseteren. To the east, north, and south, there’s a vast network of hilly, forested trails. There’s a range in terms of width, footing, and hilliness. Near Frognerseteren is also a recreational/athletic area, with skiing and numerous sports facilities.