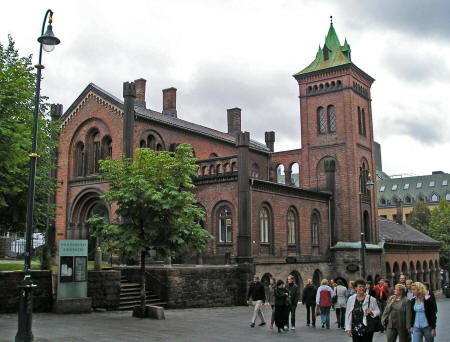 This run showcases the Oslo Cathedral and central city parks: St. Hanshaugen, Stensparken, & Slottsparken (Palace Park). It can be done as a standalone 7 km loop from downtown, or combined/mixed & matched with our Oslo Runseeing & Akerselva River routes.

Start downtown at the grand Oslo Cathedral, which dates back to 1694. It’s one of the major visitor sites in Oslo. From there, it’s 1.5 km north to St. Hanshaugen Park, using Munchs Gate/Frimanns Gate. This classic park has picturesque trails and good views of downtown the top if its rolling hills. It’s ~1 km around the park perimeter (there are additional trails). Head east for 0.5 km using Wilhelms Gate to Stensparken, a small urban park with some hilly paths. After the 1 km loop around Stensparken, head south on Pilestredet for 0.8 km to Slottsparken, the important Palace Park with grand forested paths, and then east back to downtown via the wide Studenterlunden.

Add-Ons: Combine with the waterside section of our Oslo Runseeing tour (which overlaps with Slottsparken). Also, 0.8 km east of St. Hanshaugen park, connect to the 5 km Akerselva River Trail.