No Thanks
Palm Beach/West Palm Beach 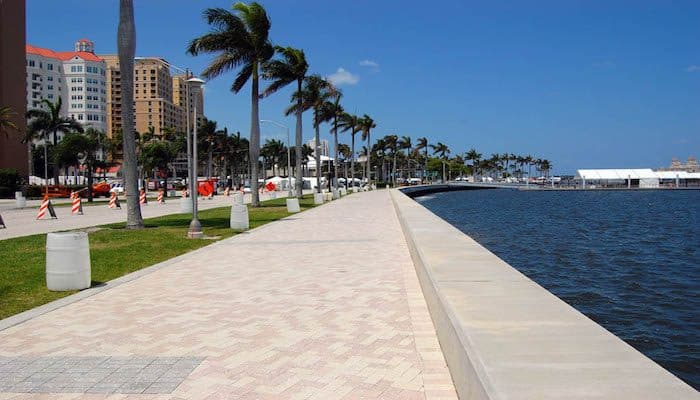 This is my other favorite run in the Palm Beach/West Palm Beach area. Flagler Drive runs for 7+ miles in West Palm Beach, with great views of the intercoastal waterway and Lake Worth for nearly the entire way. Flagler was a real estate and steel tycoon who built a mansion in Palm Beach, now a museum (there was a grand Flagler Hotel at one point). The southern end of the route is at Summa St. in West Palm Beach (here, it is S. Flagler Dr.), and heads north for 7.2 miles to 36th St. in Northwood Shores. The road name changes from S. Flagler to N. Flagler at the Flagler Bridge. There is about 0.5 miles between Greenwood, north to Monceaux, where the trail leaves to water, but there’s a nice sidewalk and it’s shady and pleasant.  Note: A nice combo run is Flagler Dr./Lake Trail. See our route!

A good point to start the run is at the Royal Park Bridge/Royal Palm Way, which is the main bridge onto the island of Palm Beach. Park at the Society of Four Arts, and run over the bridge (0.4 miles) to join Flagler Dr. The nicest section, in my opinion, is the 4 miles headed south from the bridge. Another nice section is a path/boardwalk north for ~2.5 miles from Royal Park Bridge to the Flagler Bridge and then to Currie Park. Key landmarks and distances, headed north along S. Flagler from Summa St.:

One of the nicest paths for running in south Florida. Gorgeous views of the intercoastal waterway and... more...