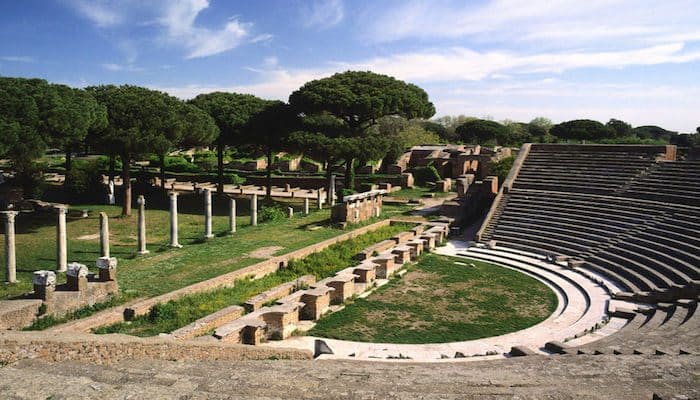 Seafront Promenade (Lungomare): A wide seafront promenade runs for nearly 6 km along the beach in Ostia. There are separate paths for cyclists and pedestrians, with the pedestrian path closest to the water. There are some nice views of the Tyrrhenian Sea, although it’s blocked by small buildings for some of the way. It’s also possible to run on the beach — there’s usually a thin strip of firm sand near the water. A nice section is ~1 km along the marina section, at the north end. There’s also ~2 km of waterfront promenade in Fiumicino, just north of Ostia.  Pro Tip: some of the beach operators have shower facilities for a few euros. Bonus: Lit at night.

Park: There are lovely, shaded, tree-lined paths in the Parco urbano Pineta di Castel Fusano, just inland from the seafront. They’re straight paths running north-south and east-west, combination of paved & unpaved. Good shaded option on a hot day. One can put together several km in here.

Ostia Antica. Ostia Antica was the harbor city of ancient Rome. It is now a well-preserved archaeological site and is a popular tourist destination due to its ancient buildings, frescoes, and mosaics. Run alsong its ancient road, on a stone surface similar to the Appian Way, although there is grass/dirt on the side as well. It’s ~1.2 miles from one end to the other in the Ostia Antica site (admission required). Add-on with lovely farm fields on either side of the Antica site. Or, run to the sea, about 2 miles (on not so pleasant streets). See above.

Biked the Park & Promenade on 5/20/22 to scope it out and then ran the promenade just before heading to airport for a flight. Note there’s not a very pleasant way to run from Antica to the seafront. Best run is along the beach, and the marina section. Town is no great shakes but there are some OK hotels if you’re hoping to get a run in before/after a flight.