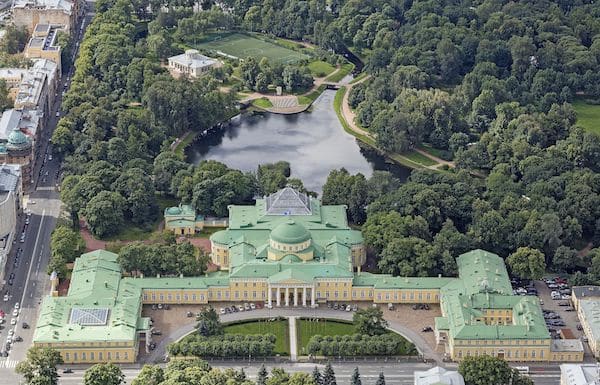 This is another good option for running in central St. Petersburg, focusing on the Neva River paths east of the Summer Garden, and a loop through Tauride (Tavricheskiy) Garden. Start at the Chizhik-Pyzhik statue, on the river next to the Summer Garden. Run east along the Kutuzov Embankment. It’s a pleasant path, although the road is wide here and there will be lots of cars. Pass the Coffee Museum (good tastings!) after 1 km, and the The Universe of Water Museum Complex at 2 km. Follow the river path, now heading south, to the spectacular Smol’nyy  Cathedral and Smolny Museum of Soviet history, located in a Palladian building used as Lenin’s Bolshevik HQ during the 1917 revolution. Then head WEST, through the small Parter Smol’nogo garden, to Tverskaya Ulitsa, passing the Monument to the Lamplighter. Run for ~1 km west to the Tavricheskiy Garden, which isn’t big but features pleasant paths around a pond and to the vast 18th century Tauride Palace and greenhouse.

For the return, two options: head back toward the river and run for 2 km along the embankment, or run west along one of the streets coming of the Tauride. Furshtatskaya Ulitsa is the most pleasant. Take it to Liteyniy Ave., turn RIGHT, and then LEFT on Ulitsa Chaykovskogo, to the end.