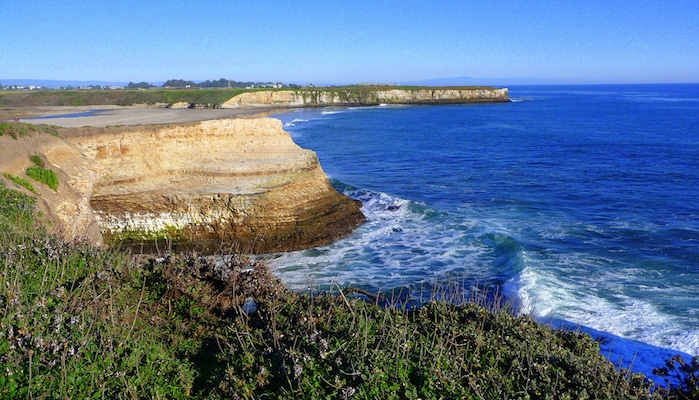 Often overshadowed by larger coastal cities, Santa Cruz is one of the don’t miss running destinations in California. While the downtown boardwalk area is remarkably festive (think ferris wheels and funnel cakes), local runners agree the top spots for running in the city are the bike path along West Cliff Drive and the seaside trails of the Wilder Ranch State Park.

You can combine the two runs (by continuing west on the bike path) if you’re looking for a long marathon training session, but each route on its own makes for a satisfying long route along the water.

West Cliff Drive: Start out from the east end of Municipal Wharf (right downtown) and head west along the water. The path ends in Natural Bridges State Beach, the perfect place to rest and enjoy the views. It’s 2.7 miles between the Wharf and the Natural Bridges along West Cliff Dr., or 5.4 miles out and back. Add another mile by going to the end of the Santa Cruz Wharf and back!. Buses run from downtown to Natural Bridges pretty regularly.

Wilder Ranch State Park: Home to the Run by the Sea 4k/12k/Half Marathon, Wilder Ranch is a trail runners’ dream. The dirt paths are non technical and smooth — a popular easy walk for families with children. However, they stretch for miles. The classic route is along the beach bluffs on the Old Cove Landing and Ohlone Bluff Trails. This flat 2.5 mile loop includes the scenic overlook above Wilder Beach and multiple spur trails down to other beaches. There are also some trails lead back into wooded terraces, which are more technical/single track. Best place to start is in the Wilder Ranch parking lot, but the run can start at Natural Bridges park in Santa Cruz just a mile and a half away.