No Thanks
Santiago, Chile 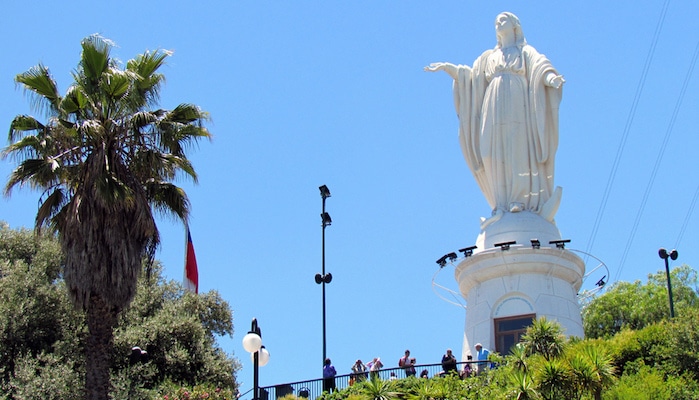 If you’re visiting Chile in anticipation of some mountainous adventure, the Parque Bicentennial, better known as Cerro San Cristobal (Saint Christopher Hill) is an awesome training run to gain some elevation. The park is about 10 km northeast of central Santiago. The second highest point in Santiago, at 300 meters above the city, it’s no Andes Mountain, but it’s a diversion from Santiago’s typical park runs, and it offers some lovely views of the city in panorama. The summit features a  sanctuary dedicated to the Immaculate Conception, with a 22-meter statue of the Blessed Virgin Mary, an amphitheater and a chapel. At the base, there’s a zoo, two lakes, Japanese Garden, and several walking paths.

You can access the park from any angle, but the El Cerro road is a good starting point since you get to check out the Japanese Gardens in all their lilypadded glory. From there, make your way up Abate Molina until it reaches Camino Claudio Gay. Bear left at the split to continue towards the Plaza Antilen, which connects the loop up the hill to the Pablo Neruda overlook where the Virgin Mary statue holds vigil over the city.

There are other options in the park, from roads, trails, stairs, and a funicular which leads to the 300 summit.