No Thanks
Sardinia, Italy 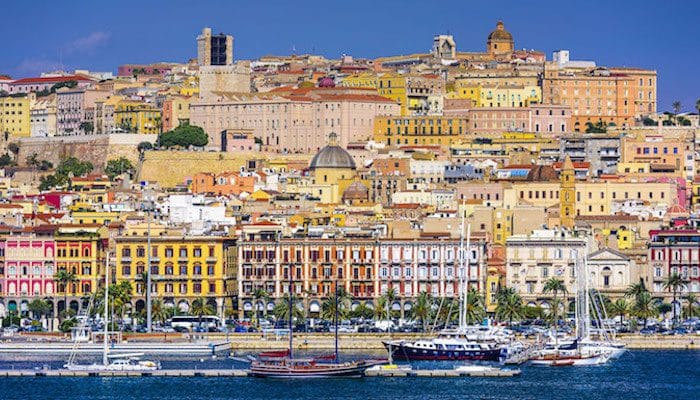 Cagliari is the capital and largest city of Sardinia, and one of the most popular tourist areas on the island. It is situated on the south central coast, where its protected harbor welcomes ferries year round. While downtown Caliari is cramped with shopping, museums, and historic Art Nouveau architecture, there are plenty of open, green spaces for runners to stretch their legs along the port, beaches, and local parks. We’ve mapped six distinct routes for running in Cagliari, below.

Spiaggia del Poetto: Poetto is the longest beach in Sardinia, forming an 8 km barrier between the Golfo degli Angeli and the Saline di Quartu. There are a couple of options for running here. The first is the sandy beach itself. Runners may find Poetto packed with people and umbrellas on hot beach days, but the firm sand around the tideline is usually suitable for a run at low tide. The second option is the paved path along the beach. This wide path has lanes for cyclists, runners, and pedestrians which ensure maximum crowd control. The path stars out on the southwest end near Piazza degli Archipelaghi and continues northeast along Viale Lungomare del Golfo to the compass rose just past Blue Sky cafe. The path is 6.4 km (4 miles) one-way, but can connect to the Saline Regional Park and other nearby routes. ROUTE MAP. 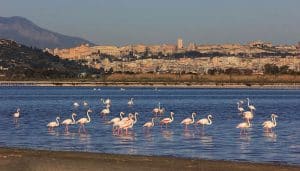 Molentargius-Saline Regional Park: This natural park was established in 1999 to protect the Molentargius salt mills, a wetland habitat for waterfowl species, including pink flamingos. Access to the park is free, and runners will find miles of trails, cycling paths, and dirt roads which are all fantastic for running. One of the best ways to enter the park is via the bridge from Poetto, so runners can put together a nice loop combining the Poetto and Molentargius-Saline trails. MOLENTARGIUS-SALINE LOOP MAP. Another favorite option is the Pista Ciclabile Terramaini-Molentargius, which continues 6 km north along the Riu Saliu to Parco Terramaini, with views of the Molentargius lagoon. PISTA CICLABILE ROUTE MAP. 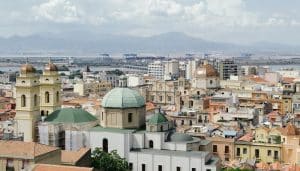 Cagliari ‘Runseeing’ Tour: With it’s high volume of historic and Art Nouveau architecture, Cagliari is a sightseer’s dream. Runners will be happy to learn that most of the city’s landmarks can be visited on foot, with this 5k runseeing tour. Starting from the Cagliari train station, run northeast on the sidewalk of Largo Carlo Felice to Piazza Jenne, then turn RIGHT on Via Giuseppe Manno (pedestrian only) until reaching the Bastione Saint Remy. Wrap north around the Piazza Martiri D’Italia, through Porta dei Due Leoni, to the Torre dell’ Elefanti. Turn RIGHT and run south on Via San Giuseppe back to Piazza Martiri D’Italia. Head north on Via del Fossario, past the Old Town Hall and Cagliari Cathedral, and Palazzo Regio to Porta Cristina. Bear RIGHT on Via Ubaldo Badas to reach the Public Gardens. At the north end of the gardens, follow the path to the east, pass the Roman Amphitheater, and enter the Orto Botanico di Cagliari. Use Via Sant Ignazio da Laconi to head south out of the park, then turn RIGHT to pass through the Fortificazioni Pisane to the Church of San Michele. Continue north up Via Ospedale, turn RIGHT down the staircase to Via Santa Restituta, and pass the Sant Efisio and Saint Anne’s churches on the way back to Via Domenico Alberto Azuni. Turn LEFT on Azuni, then RIGHT on Via Santa Margherita to return to Piazza Jenne, then take Carlo Felice back to the station. ROUTE MAP.

Parco di Monte Urpinu: For a great views and a killer climb, head to this park in central Cagliari! Runners can use any of the park’s interior paths to get to the summit, but the sidewalks along the perimeter streets of the park are also great for running. Use Via Salvatore Vidal, Viale Europa, Via Fillippo Garavetti, and Via Francesco Gemelli for a 2.3 km loop. ROUTE MAP.

Parco di San Michele: This large bluff in Is Mirrionis, 3 km north of Cagliari, is named for the historic fortress atop the hill. There are some great (but short) running trails up to the fortress, where runners can put together a 2.5 km loop. Use the Percoso Pedonale del Colle di San Michele to run up and around the castle, then use Via Sirai to return. Using a few side streets, runners can add on the Parco di Monte Claro for more distance. ROUTE MAP.

Wonderful waterfront running in a coastal city of Alghero known for its beaches, colorful architecture, and sea... more...