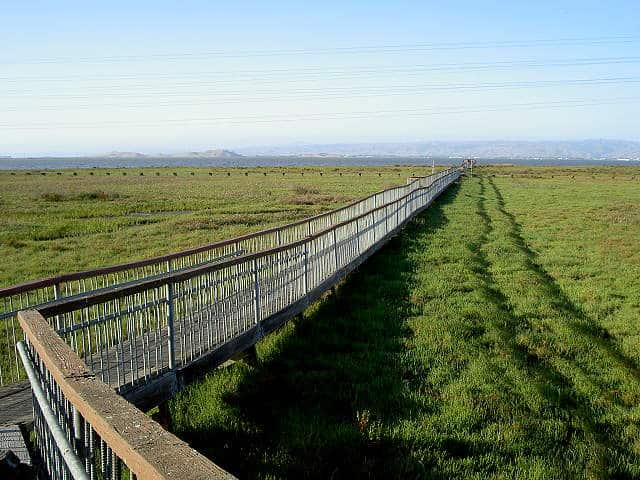 On the eastern shore between Palo Alto and San Jose, there is a remarkable series of trails and parks overlooking the Bay. Several of these trails incorporate a series of undisturbed tidal marshland (Sloughs) called the Baylands. The trails are a combination of paved and unpaved, and are wonderful for walking and running. It’s a combination of running along the Bay, out along the levees of the sloughs, and through some pleasant parks. This is also among the best bird-watching areas on the west coast. Keep an eye out for the gorgeous white pelicans! Note that several major high tech company HQ, such as the Googleplex, sit between the I-101 and the Baylands trails.

It is impossible to describe any one or two particular runs in the Baylands. There are three main sections of these trails, each described below: East Palo Alto; Mountain View (near Google and NASA); and toward San Jose (the Alviso trails). The “Bay Trail” is an anchor but is not seamless. Below, from north to south, we have described some of the best options for running. Only 2.5 miles from downtown Palo Alto and right off the 101. Below are a couple of good options. Also, connect to other trails here, such as the San Francisco Creek Trail, which goes around the Palo Alto golf course. A section of the Bay Trail heads west toward the Ravenswood Open Space Preserve. There are great options in this area, close to many corporate HQ, hotels, Levi’s Stadium, and the Santa Clara Convention Center.